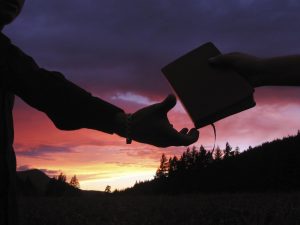 On David’s return from killing the Philistine, Abner took him and brought him before Saul with the head of the Philistine in his hand. I Samuel 17:57

When we are introduced to someone by someone else, we want to make a good impression! As much as it is important for the one to whom we are being introduced, it is also important, and perhaps more so, to the one who is introducing us to the other person. That person may be a close friend or someone in a position of authority to the one making the introduction.

A certain young man has come to the attention of Saul, King of the Israelites. Saul asks Abner, his commander of the army, whose son is this young man. Abner acknowledges that he does not know. The king tells Abner to inquire whose son the young man is. Once David returned from killing the Philistine, Abner took him and brought him before Saul with the head of the Philistine in his hand.

Now we must admit that would be a gruesome introduction and yet we acknowledge that up to that point Goliath had been a formidable opponent of the Israelites. Seemingly there was no one who could take down this enemy. Abner, commander of the army, introduces David to King Saul. It certainly was a first meeting that I dare say, none of them would ever forget. It was now obvious that the Philistines might be defeated with young warriors like David in the Israelite army. Abner also saw the courage and strength of one of the Israelites’ finest.

O God, keep in our minds the importance of making a good impression when being introduced to someone. Help us to introduce others to Christ, for they may make His acquaintance through us.  In His name, we pray. Amen.