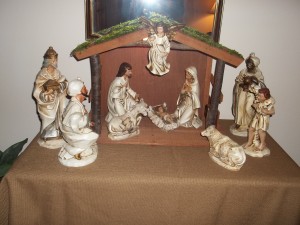 Loretta Traviss’ nativity set, a gift that keeps on giving.

Loretta Traviss’ nativity set was a gift that became an inheritance. After the death of her grandmother, her mother, who was an only child, went to live with her grandfather. While searching for a gift for them, she found this nativity set at Maas Brothers in Lakeland. She purchased the stable with resin figures. A special feature of it is that the stable contains a music box that plays “Silent Night.” In time following the death of her grandfather and her mother, Loretta inherited the nativity, the gift she had given them.

At times the nativity set was placed under the Christmas tree. Now it is displayed on a bureau in her living room.

Thought for the Day: Have you ever been remembered in someone’s will or received an inheritance? Now other than the material or monetary inheritance you received, what do you most dearly remember about the one who made you his or her heir?

Prayer: O God and Father of our Lord Jesus Christ, we thank You that Jesus was born in a stable in Bethlehem and that You raised Him from the dead in Jerusalem. We are grateful that we have an imperishable and undefiled inheritance through Him that is preserved for us in heaven. This Christmas help us to see that the Gift You gave so long ago keeps on giving. In the name of Jesus Christ, we pray. Amen.