Another Dysfunctional Family in the Bible 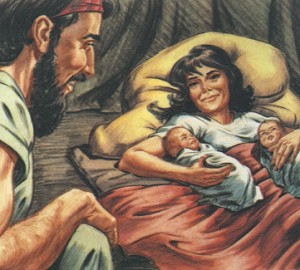 But the children struggled together within her …. Isaac loved Esau because he was fond of game, but Rebekah loved Jacob. Genesis 25:22a, 28 (NRSV)

Friends, several weeks ago we were introduced to the first example of a dysfunctional family in the book of Genesis. That story focused on the two sons of the first family, the children of Adam and Eve. There we found an example of sibling rivalry where the tensions so mounted that the result was fratricide, as Cain slew his brother Abel.

Today’s scripture lesson is about Isaac, the long promised heir of Abraham, and his wife, Rebekah. Isaac, essentially grew up as an only child. As an only child, I will readily admit only children are more accustomed to getting their way than in homes where there are more children, which may be a factor influencing today’s story. Sarah, ran her slave Hagar and her son by Abraham, Ishmael, off. Sarah was determined that Isaac alone would be Abraham and Sarah’s heir. She had no intention of her son having to share his inheritance. You may remember that God looked after and provided for Ishmael too because there was no denying that he was Abraham’s son.

Isaac was forty years old when he married Rebekah and she was barren for some time into their marriage. Later she conceived and she delivered two sons, whom they named Esau and Jacob. The firstborn, Esau was red and hairy. The second child, Jacob, was holding onto his brother’s heel when he was born. (an early manifestation of sibling rivalry?) Isaac and Rebekah had waited twenty years to become parents and they, no doubt, were overjoyed.

The children grew and displayed their own personalities. Esau was an outdoorsman who loved to hunt game. Since Isaac liked game, he favored Esau. Jacob preferred domestic life, living in tents and cooking. Jacob was the apple of his mother’s eye. In the scripture we read, “Isaac loved Esau … but Rebekah loved Jacob.” Sibling rivalry is now exacerbated by parental preferences. I do not believe that Isaac did not love Jacob and that Rebekah did not love Esau, but I do believe they showed favoritism, which added another dimension to this dysfunctional family!

The story concludes with the younger brother, Jacob, taking advantage of Esau when he was hungry by bargaining for his birthright for the price of a bowl of stew. Esau forfeited something extremely precious (his rightful place within the family) to satisfy an immediate need (his hunger). He could never regain his birthright and he would get hungry again. Through this action, the brothers proved what the Lord had said before they were born: “The one shall be stronger than the other, the elder shall serve the younger.” With brothers like those, being an only child is a blessing!

Loving and Patient God, You love brothers and sisters who don’t play fair and are jealous of one another. You love parents, who make mistakes in rearing their children, including showing favor to one over another. You love parents and children, who don’t always show the love and respect to which they are entitled. You love dysfunctional families! You are patient, loving and forgiving with all of us sinners and all we can do is express our thanks and marvel at Your grace and mercy. In Jesus’ name, we pray. Amen.