Any Gods Made with Hands are not Gods 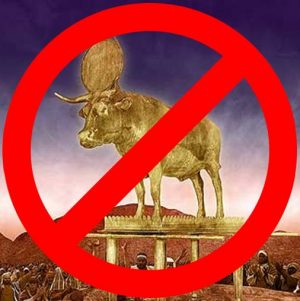 This Paul has persuaded and drawn away a considerable number of people by saying that gods made with hands are not gods. Acts 19:26b.

Wow, can you believe how Paul was so insightful. He was able to grasp the major problem here in Ephesus. The real problem was the greed of humankind trying to get rich on the back of a religious movement! So good friends we can all sleep well tonight. The real problem that Paul ran into was not religious, it was about making money falsely! In vs. 24 we read about a man named Demetrious, a silversmith who made silver Shrines of Artemis, a false god, who was worshipped and revered. Demetrius became wealthy making and selling these little shrines to the false god. There probably is no sin in making money as long as it is an honest business. But in this case, Demetrius could see that if the people became believers of what Paul taught, it would put him out of business. Paul taught then what we believe even today, that Jesus Christ is The Son of the Living God, and he died on the Cross and rose again, to save the world from the sins of disobedience.

Paul’s real concern was not people like Demetrious becoming rich by selling things of their religious beliefs. Paul’s mission was to teach how much God the Father loved the world that He gave His only Begotten Son that the world should believe and be saved from the consequences of sin. Teaching God’s Law and God’s eternal saving grace is never motivated by trying to get rich! Paul hit the nail on its head when he said that ”gods made with hands are not gods!”. What we believe is in giving our tithe from the heart and love of God, and not for personal gain and wealth. Our giving to the church is not for personal gain but to express our heartfelt praise.

As an aside, this is probably why we do not know any preachers who get rich from their preaching! A sincere committed minister of The Word of God would gladly serve The Church for nothing monetarily. This reminds me of a funny story I heard some time ago. It’s a joke told about the highly esteemed Evangelist, The Rev. Dr. Billy Graham. It seems Dr. Graham was flying into Miami, Fl. to lead a religious revival. A limousine was sent to pick him up. As he and the driver walked up to this special large vehicle, Dr. Graham asked the driver if he could drive the limousine because he had always wanted to. Of course the driver said sure. After all, he is Dr. Billy Graham! Dr. Billy really enjoyed driving this special car, but as he got up on I 95 he started to put the petal down. Sure enough, a highway patrol car stopped him. When the policeman walked up to the car and saw who it was driving, he immediately went back to his patrol car and called his sergeant and told him about pulling Dr. Billy Graham over for speeding, His sergeant said “O. K. just give him a speeding ticket”. “ But, the policeman said, if Dr. Graham is driving, who is it sitting in the back seat, God?”

This insightfulness into the inner faith of Paul shows that he was able to take the time to see how some were using ‘religion’ as a means to achieve wealth. His concern was as we believe in the Living God who provides for all our needs, that God’s Love can never be earned or brought; IT IS FREELY GIVEN! So our lesson; for you, me and all of us, needs to be in self examination to make sure what we give is given as an honest heartfelt expression of our love and gratefulness to God our Maker.

Heavenly Loving God, teach us to worship You with the giving of our entire love. Amen.