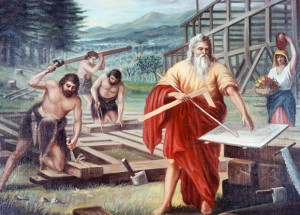 Noah did this; he did all that God commanded him. Genesis 6:22 (NRSV)

Earlier in the sixth chapter of Genesis, we read that God has become quite distressed by the wickedness God has witnessed on the earth. God is grieved to the heart for having made humankind. God decided that the best solution was to blot out all humankind and indeed all animals, “creepy crawlies,” and birds of the air. There was, however, one bright light in this world of darkness and that light was Noah, who found favor in the sight of the Lord.

God confides to Noah his sorrow for the corruptness of the earth. God intends to put an end to all humankind and indeed to destroy the earth. God has not yet revealed how He plans to bring about such destruction. God then gives Noah some very detailed instructions.

On dry land with no rain in sight, God tells Noah to build an ark to be constructed of cypress wood and cover it inside and out with pitch. Long before “open concept design” would become fashionable in planning and utilizing space, this ark is to have rooms. The length of the ark is to be 300 cubits, its width, 50 cubits; and its height, 30 cubits. The ark is to have a roof, a cubit above its walls. Noah is to put a door in the side and there are to be lower, second, and third decks.

Then God shares His plans with Noah. God will bring a flood of waters that will spill from heaven and burst forth from fountains beneath the sea. These will swell so that everything that has breath will be destroyed and everything on the earth shall die. Noah is to take with him, his wife, his three sons, Japheth, Shem, and Ham and their wives.

Last but not least, Noah is to stock the ark with food for all of the human beings and creatures aboard. In doing all that God commanded, Noah was attentive to details. This may partially explain why Noah found favor in God’s sight. Noah was not perfect, but he was striving to do God’s will and to be attentive to details. There’s a popular saying that goes, “Don’t sweat the small stuff!” I believe that may be misleading especially as it concerns God’s commands. I believe that we need to be attentive to details in order to be faithful and obedient to God. What about you?

Blessed Lord, help us to be faithful and obedient in every way so that we too may find favor in Your sight. Keep us mindful that following instructions and being attentive to details are important. In the name of Christ, we pray. Amen.