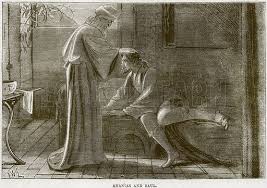 “Now there was a believer in Damascus named Ananias. The Lord spoke to him in a vision calling, “Ananias!”

The Lord said,” Go over to Straight Street, to the house of Judas. When you get there, ask for a man from Tarsus names Saul. He is praying to me right now. I have shown him a vision of a man named Ananias coming in and laying hands on him so he can see again.”

“But Lord,” exclaimed Ananias,” I’ve heard many people talk about terrible things this man had done to the believers in Jerusalem! And he is authorized by the leading priests to arrest everyone who calls upon your name.

But the Lord said,” Go, for Saul is my chosen instrument to take my message to the Gentiles and to kings, as well as to the people of Israel. And I will show him how much he must suffer for my name’s sake.” Acts 9:10-16

Has anyone ever felt like Ananias? God has given you a task and you say,” But, Lord?” I have. More times that I care to admit. For a hot second we argue thinking that we can talk our way out of it? We don’t trust God and we are scared of what will happen or what people may think. That is hard to say and hard to hear, but it is the truth. God’s way is always better, always. Imagine if Ananias had not been obedient worrying about his own safety instead of worrying about kingdom things. Thankfully, after arguing with God for a minute he is overtaken by the desire to do God’s will rather than his own.

We have the same choice to make today. We can follow God and trust him with our future knowing it may be sprinkled with difficulties and valleys or follow our own path that is safe because we feel in control. Will we allow the Holy Spirit to guide us and give us the courage we cannot find on our own or run? This is a tough journey, but one we are called to none the less. God is in control of our earthly lives and our eternity. He knows all things and is all things. In prayer let’s take a leap of faith and trust God like Ananias did. It wasn’t pretty and he had doubts and fears just like us, but in the end he was obedient.

Gracious God, I pray that I am obedient to Your call. Even when it is scary and I am plagued with uncertainty, help me Lord, to live with abandon. Help me to drop everything and follow You and to be about kingdom things and not worldly things. May the desire of my heart be to follow You knowing that You are in control of all things. In Jesus Name, Amen.