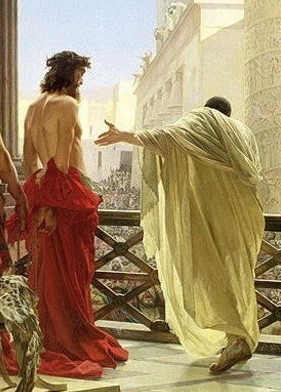 Jesus had become very popular with the common people and the religious leaders were uncomfortable with His increasing popularity. They felt they would lose their influence over the people. In their estimation: Something Had To Be Done!

They, that is the chief priests and other religious authorities, thought this would be the final solution to their “Jesus” problem. They would cajole or persuade Pontius Pilate to do their dirty work for them. They would put pressure on Pilate to have Jesus killed.

Pilate and Jesus saw the world and its being ruled by people differently. Pilate was concerned with physical territories and them being governed and expanded by force. Jesus was concerned with a kingdom governed and expanded by God’s love. Pilate did not think that Jesus had done anything wrong and was reluctant to punish Him. On the other hand, the people were very outspoken and did all they could to force Pilate’s hand.

“The priests smiled. Soon Jesus would be gone. Jesus knew that He would die, but that would not be the end of the story. Jesus knew God’s plan too!”

In this story, I feel sorry for Pilate. His office carried with it a lot of power. He exhibits great weakness in acquiescing to the people’s demands. In his heart and mind, Pilate recognized Jesus’ innocence. If he stood up against the people, he could suffer from Rome’s reaction to his poor governing. His superiors would be displeased that he could not rule this tiny part of the Roman Empire and he could lose his position. He made a poor choice because he lacked courage and strength.

The One I feel happy for is Jesus. Jesus knew God’s plan and knowing that made it easier for to go through the terrible suffering He did. Truly, Jesus Christ is the King who died on the cross for your sins and mine. Thank you, Lord Jesus!

O God, give us strength to stand up for what is right. Give us courage when doing what is right can hurt us. Thank You, Lord for loving us so much! Amen.