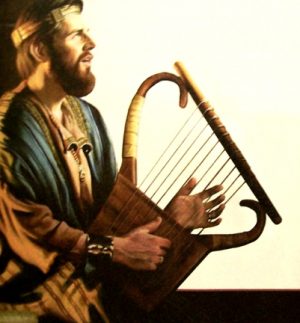 Let our Lord now command the servants who attend you to look for someone who is skillful in playing the lyre, and when the evil spirit from God is upon you, he will play it and you will feel better.
I Samuel 16:16

I love music! I can write a letter, paper or sermon with instrumental music playing in the background. I cannot concentrate on what I am writing if the music is of a vocal or choral nature. The lyrics disturb my thought processes.

I love most musical instruments. I like the mellow sounds that come from a cello or French horn. Keyboard instruments are among my favorites, notably the piano and pipe organ. One instrument that when played almost always has a soothing sound about it is a harp or lyre. (Exception: When Harpo Marx played Take Me Out to the Ball Game on an episode of I Love Lucy.)

David, the shepherd boy who would one day become King of Israel, was skillful in playing the harp. Now King Saul was greatly disturbed and tormented. His servants prevailed upon him to let them find a skilled musician who could play and soothe his troubled mind. In addition to being recognized as a skilled lyre player, David was recommended as a man of valor, a warrior, prudent in speech , a man of good presence and one with whom the Lord was present. Saul sent word to Jesse, David’s father, requesting that David might be sent to him. Jesse sent his son loaded with gifts of bread, wine and a kid to King Saul. David found favor in Saul’s sight, became his armor bearer, and was loved by the king. Later Saul sent word to Jesse asking that his son might remain in the king’s service and Jesse obliged.

Whenever King Saul became troubled by the evil spirit, David took up his lyre and played. His playing relieved the king of the torment he experienced. He felt better. The evil spirit departed. In addition to playing the lyre, David also wrote hymns, many of which are found in the Psalms.

When you are experiencing distress, what instruments provide soothing sounds for you? Do you find music to help you relax? Are there hymns, whose music or lyrics, bring comfort to you? What are some of them?

Lord, we do give thanks that in our music You are glorified. We also thank You for those instruments and melodies that bring us comfort when we are distressed and that restore wholeness to us when we have known brokenness. Buoy our spirits when they are low and help us always to praise Your name, for Christ’s sake. Amen.