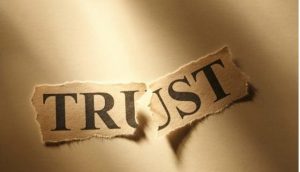 ”Then she said to him, ‘How can you say, ‘I love you’ when your heart is not with me? You have mocked me three times now and have not told me what makes your strength so great.”
Judges 16:15

According to one scholar, “living in the valley of Sorek would allow her to be either a Philistine or an Israelite.” For our sake, let us say that Delilah was one of them … a Philistine. She was an enemy of God’s people who used her beauty and charms to seduce one of God’s servants. In the end her treachery would bring her heartache as well as her own destruction.

Now Samson was a judge of Israel and he was a nazirite, who did not drink wine or strong drink, consume unclean foods, or have his hair cut. From his youth he was drawn to women outside of his faith, namely Philistines. The one who would truly be the woman of his undoing was Delilah. She conspires with her husband’s enemy, the Philistines, for the price of eleven hundreds pieces of silver. She is promised this money for revealing to them the secret of his great strength

We can imagine her cuddling up to Samson and running her fingers through his hair and wrapping his magnificent curls around them. She sweet talks him. Its effect upon him is just as intoxicating as if he indulged in strong drink. She coyly asks, “Please tell me what makes your strength so great, and how could you be bound so that no one could subdue you?” The first surprise is that Samson obliges this request, but he safeguards the true secret of his strength. She then gives this information to her collaborators and they discover it is bogus. Twice more Delilah tries to discover the secret and twice more Samson is not forthcoming with the secret.

Then Delilah turns on the waterworks … she cries. She asks, ‘How can you say, ‘I love you’ when your heart is not with me? You have mocked me three times now and have not told me what makes your strength so great.’ She is relentless in her attempts to discover the secret of his strength and finally he acquiesces. Then Delilah ran her fingers through the eleven hundred silver coins as a barber shaved Samson’s head. With his strength gone, Samson was defeated by his enemies not the least of which was Delilah. And we thought only men, like Judas, could betray another for money!

O God, betrayals have been part of the Biblical record and we see them in life today. Guard us from ever betraying those who trust us. Help us to be wise and cautious so that we are not betrayed. In Jesus’ name, we pray. Amen.