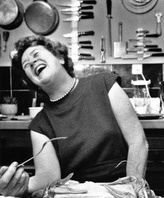 On recognizing Peter’s voice [Rhoda] was so overjoyed that instead of opening the gate, she ran in and announced that Peter was standing at the gate. Acts 12:14

Upon our first reading of the scripture above, we might wonder to ourselves how could Rhoda have been so stupid as to leave Peter standing at the gate while she announced to the household he was just outside. If Peter was really there, surely Rhoda would have brought him inside rather than leaving him at the gate. We are told why she acted as she did … why she seemingly did not possess all of her faculties. Rhoda was “overjoyed.” Have you ever been so excited or so happy that you just did not act quite right?

In May, 1976, I had the opportunity to go to Washington D.C. to meet the celebrated French Chef, Julia Child, and to attend some of her cooking demonstrations. I had watched her on television for some time and I felt like she would be unmistakable should I ever have the chance for a person-to-person encounter. Her appearances were for a national charity and were scheduled for the Shoreham Americana Hotel in the district.

On the afternoon before her first demonstration that evening, Mother and I were walking through one of the hotel’s back corridors. We were talking and walking and so I did not pay much attention to the two women approaching us, even though one was over six feet tall. I was so excited to be there and was filled with such great expectation of meeting this woman I had so greatly admired – that I walked right past her! In the subsequent moments, Mother asked me, “Wasn’t that Julia?!” I looked back and it was! I thought I would know her anywhere and yet I could not bring myself to go racing back to catch up with her … and to tell her how much enjoyment she had brought me as I had long watched her cooking show, The French Chef.

Later that night after her first demonstration, I did get to meet her, to have some cookbooks signed by her and to have my photograph taken with her. She was just as charming and gracious as I imagined that she would be! I still can’t believe I walked right by her and yet I am thankful for that moment of being deliriously happy … to be where I was and to be so excited about what I envisioned happening later that evening.

As the Rhoda story ends, Peter keeps knocking until he is given entrance and Rhoda is finally seen as having been deliriously happy instead of not knowing what she was talking about. Rhoda probably never got over having been so happy to hear Peter’s voice and having left him standing and knocking at the gate! I know I will never forget passing Julia in the hallway and not recognizing her immediately!

Dear God, thank You for those moments of being deliriously happy, even when we don’t act quite right. In Jesus’ name, we pray. Amen.