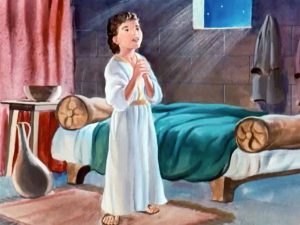 In the morning before I wrote this devotional, I had arisen very early and was trying to be very quiet. I decided I would make some hot fresh scones for breakfast. Taking out a bowl from the cabinet, I lost my grip, and the bowl, and several others, came clattering to the floor. The whole household’s sleep was disturbed. So much for a breakfast surprise! We are startled by things that go bump in the night, or in this case, when you question voices that one hears.

Samuel is 12 years old and he is living in the temple with Eli the priest, whose vision is dimmed. Samuel reports that he heard Eli calling him, but Eli declares that he was sound asleep and did not call him. He tells Samuel to go back to sleep. Again, Samuel hears a voice calling him and he believes it to be Eli. The aged priest is not amused and sends the lad back to bed. He tells him that he did not call him. The boy is sure he heard a voice and he is equally certain that Eli called him. Samuel goes back to bed, feeling confused about these events.

“When this happened a third time, Eli thought to himself, ‘Aha! It must be God who is calling Samuel.’ Eli told Samuel, who was now very confused and sleepy, ‘If you are called again, just say, ‘God, I hear you and I will do whatever you want.’ When the voice called again Samuel did as Eli told him. It was God! And God had many things to say to Samuel.””

The third time was the charm. It was not Eli who had been calling the boy. It was God, and God had many things to say to Samuel. Samuel would be recognized as God’s trusted prophet. We like Samuel can receive messages from God. God speaks to us as we read the Bible. God speaks to us as survey God’s beautiful and wonder-filled creation. God speaks to us in silence. God speaks to us through parents, teachers, friends and others. God can use several ways to get our attention and to encourage us to listen to His voice and to obey Him.

O Lord, speak to us and make Your voice unmistakable. Reveal what you would have us to do. Show us the way. In Christ’s name, we pray. Amen.