God Has This All Worked Out 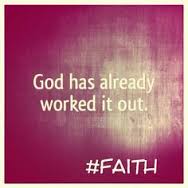 So he said, “Those of you in authority can return with me. If Paul has done anything wrong, you can make your accusations.”

About eight or ten days later Festus returned to Caesarea, and on the following day he took his seat in court and ordered that Paul be brought in. When Paul arrived, the Jewish leaders from Jerusalem gathered around and made many serious accusations they couldn’t prove.

Paul denied the charges. “I am not guilty of any crime against the Jewish laws or the Temple or the Roman government,” he said.

Then Festus, wanting to please the Jews, asked him, “Are you willing to go to Jerusalem and stand trial before me there?”

But Paul replied, “No! This is the official Roman court, so I ought to be tried right here. You know very well I am not guilty of harming the Jews. If I have done something worthy of death, I don’t refuse to die. But if I am innocent, no one has a right to turn me over to these men to kill me. I appeal to Caesar!” Acts 25:5-11

There are two things in this chapter that caught my attention. First, if God had ordained it, it’s going to happen! No matter how dire the situation is, God is in control. It didn’t matter that the Jews were plotting earlier in the passage to have Paul moved to Jerusalem to ambush him (Acts 25:3). That wasn’t God’s plan so Paul stayed right where he was. Try as they might, the Jews could not thwart God’s plan. The same is still true today. Try as we might to make our plan God’s plan it just won’t happen.

Secondly, Paul knew this same truth. If God has ordained it, he was going to stand on God’s truth. That is where he gets his other worldly courage and strength to continue the fight he is still in after all this time. I am not saying Paul didn’t have moments of doubt or fear, I am just saying he didn’t allow those feelings to rule his thoughts and his actions. He chose to live in God’s grace and truth. When we don’t trust God, fear rules in our hearts and minds. Fear is not from the Lord. Fear is crippling and causes us to see things through the lenses of the world, not God. To trust God means to trust His ways not our own.  Paul continues to be an example of how to do just that.

Gracious and Loving God, please help me to live in Your light. Help me to trust You and all of Your ways. Forgive me of the times that I haven’t trusted You and have allowed fear to rule in my life rather than living in Your peace that passes all understanding. At times I cannot understand how Paul continued on and here You remind me that it was trust in You and in Your plan. Your plans are for me. In the name of Jesus help me to remember that daily in my walk with You. In Your Most Holy name I pray, Amen.