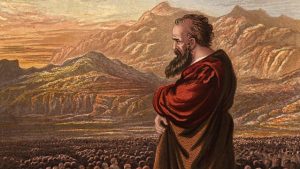 Did you know there are mountain people and then there are beach people? These people maintain that they feel especially close to God in one locale or the other. I happen to be one of the mountain people. If I could live anywhere from where I am presently living, then it would be in the mountains. I enjoyed living for awhile in Boone, North Carolina, and for a much longer period in the mountains of southwest Virginia. The mountains are beautiful in any season of the year, but I am partial to autumn and spring. I have always felt that I was just “a little closer to God,” when in the mountains.

Years ago, in an interview, Baroness Maria von Trapp of The Sound of Music fame said, “I could view the first few minutes of that film every morning.” It is breathtaking footage! She had grown up in the mountains surrounding Salzburg, Austria, and while she loved living in the Green Mountain State of Vermont it was not the same as the Austrian Alps. I never will forget flying over the Alps from Geneva, Switzerland, to Vienna, Austria, some years ago! Wow!

Isaiah was a prophet and he was given messages from God to give to the people. He was to tell them, “Trust God!” and “Count on God to take care of you.” Furthermore, he was to share this news: “Someday God will send us the Messiah – the great Savior and King.”

“Isaiah shared a message about a time in the future when everyone would get along and live together in peace. He said, ‘Soon the mountain where the temple of God is will become the highest mountain of all. People will shout, ‘Let’s hurry to the mountain! We will learn about God there.’”

As we put ourselves in those people’s sandals, we can imagine the welcome with which those words were received. We can imagine the excitement of the people as they considered a world, where God would settle arguments between people. They were thrilled to learn that weapons no longer would be made to hurt and kill people. There would be no more violence or war! The darkness of this world would be dispelled so that all would live in the light of God together.

In fact, that is the news we want to hear… and today! No more road rage! No more shootings! No more wars! No more weapons of destruction! Tools for building and cultivating would be fashioned out of the weapons. It would be great when everyone got along with his or her neighbors and better yet found themselves living in God’s presence on the highest mountain of all.

Creator God, we do thank You that “You paint the scenery of mountain greenery.” We thank You for this vision that Isaiah shared with the people and which has been passed down to us. Help us cling to that image, longing for its coming, and at the same time endeavoring to be the peacemakers You would have us to be here and now. In Christ’s name, we pray. Amen.