Hallowed be Thy Name 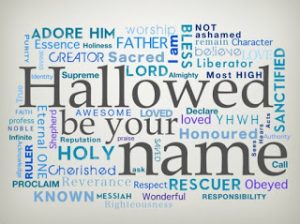 When a person knows and uses your name, he or she has a certain power over you. If you question that statement, consider the following scenario. You are in a crowd and suddenly you hear your name being called. You survey the crowd looking for the person who called your name. You have diverted your attention from what you were doing to respond to the one who called out your name. If nothing more occurs other than you greeting each other from a distance, the person captured your attention (exercised power over you) for that short time.

Today we examine the first of seven petitions found in the Lord’s Prayer. Of the seven, three address God and the remaining four focus on our concerns and needs. The first petition is: “Hallowed be Thy name.”

One commentator has written: “To understand why God’s name should be hallowed, we first need to understand that the Jews (God’s chosen people had different naming customs than we do today. To a Jew, a person’s name was more than a way to identify the person physically, their name also reflected their nature. Jews name their children in a way that expressed the child’s mission in life. Because of this custom, the Jewish people had about sixteen different names for God in the Hebrew Old Testament. Each name reflected a different aspect of God’s character, so God’s names were considered by the Jews to be just as holy as God Himself. In fact, God’s names were and are so holy to the Jews that they never write His full name for fear of bringing disrespect to it and to God.”

As we pray the Lord’s Prayer it is appropriate that “Hallowed be Thy name” is included for not only is God holy, but His name is holy too. We should always treat God’s name with great respect and honor as we do God, for God and His name are one in the same.

Most Holy God, as we bow before You, help us always to honor and respect Your name. Guard us from ever misusing Your name and for ever attempting to control You by what we say. In Christ’s name, we pray. Amen.