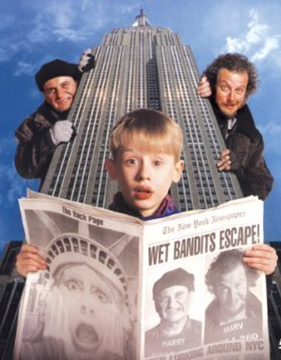 “For as in one body we have many members, and not all the members have the same function, so we, who are many, are one body in Christ, and individually we are members one of another. We have gifts that differ according to the grace given to us: prophecy, in proportion to faith; ministry, in ministering; the teacher, in teaching; the exhorter, in exhortation; the giver, in generosity; the leader, in diligence; the compassionate, in cheerfulness.” Romans 12:4-9 (NRSV)

Home Alone 2: Lost in New York is a 1992 American Christmas family comedy film written and produced by John Hughes and directed by Chris Columbus. It is the second movie in the Home Alone series and the sequel to Home Alone. The film stars Macaulay Culkin in the lead role as Kevin McCallister while Joe Pesci and Daniel Stern reprise their roles as Harry and Marv, the Wet / Sticky Bandits. I see Christ in the homeless woman in Central Park that tends to the pigeons and God in the toy store owner, Mr. Duncan. Like Jesus saves us, the pigeon lady saves Kevin from the criminals, Harry and Marv. On Christmas Eve, Kevin tours the city in a limousine and visits a toy store where he meets its philanthropic owner, Mr. Duncan. Kevin learns that the proceeds from Christmas sales will be donated to a children’s hospital. Mr. Duncan gives Kevin a pair of ceramic turtledoves as a gift, instructing him to give one to another person as a sign of eternal friendship. This reminds me of the gifts that God gives to each of us to share with each other.

Why I like the film so much and how it became a holiday viewing tradition with me:

I like this movie because it reminds us that the holidays are no time to be alone. Spending time with family and friends is what makes Christmas so very special. I also enjoy seeing the World Trade Center Towers and the other New York City sights. It is easy to make this film a viewing tradition because it gets broadcast repeatedly on a couple of channels and I almost always watch it more than once each season.

Father to the Fatherless, we lift up those who are alone this Christmas season. Please wrap them in Your loving arms and bless their hearts with faith, joy, peace, and love. Help us to be a blessing to those who may be lonely this time of year. Thank You for being ever present with us Lord. Amen.