How Far Would I Go? 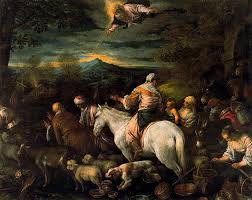 Now the Lord said to Abram, “Go from your country and your kindred and your father’s house to I will show you. I will make of you a great nation, and I will bless you, and make your name great, so that you will be a blessing. I will bless those who bless you, and the one who curses you I will curse; and in you all the families of the earth shall be blessed.” So Abram went, as the Lord had told him; and Lot went with him. Abram was seventy-five years old when he departed from Haran. Abram took his wife Sarai and his brother’s son Lot, and all the possessions that they had gathered, and the persons whom they had acquired in Haran; and they set forth to go to the land of Canaan. When they had come to the land of Canaan, Abram passed through the land to the place at Shechem, to the oak of Moreh. At that time the Canaanites were in the land. Then the Lord appeared to Abram, and said, “To your offspring I will give this land.” So he built there an altar to the Lord, who had appeared to him. From there he moved on to the hill country on the east of Bethel, and pitched his tent, with Bethel on the west and Ai on the east; and there he built an altar to the Lord and invoked the name of the Lord. And Abram journeyed on by stages toward the Negeb. Genesis 12:1-9

The Lord said to Abram ”get up and go”. And Abram went.

Abram was 75 years old when the Lord told him to go. For 75 years he had lived with his people and in his hometown, and yet when God told him to go, Abram went. I don’t know if I would do that. I have only been back here in Winter Haven nineteen years (the longest I have lived any place in my life) but it would be hard to leave. It goes without saying that I like the people who worship and serve God with me at our church. I also enjoy having a mechanic and plumber that I trust. I have favorite places to eat. I enjoy that when I go to a community or city event, I often encounter people that I know. What a step of faith it was for Abram (and Sarai) to journey at out God’s invitation. But when God told him to go, Abram went.

That’s probably why Abram gets mentioned by New Testament writers an example of a faithful person. And maybe we can start exercising our faith by going on shorter journeys with God.

God may say: “Go across the sanctuary, classroom, or office and speak to that person who seems lonely.” Will I go?

God may say: “Go down to the Soup Kitchen or Saturday Nite Live and help out this week.” Will I go?

God may say: “Stop by a nursing home and visit one or two residents who have no family to come and see them.” Will I go?

I once had a poster that read: Faith is walking to the edge of all the light you have — and taking one more step. How far will I go?

Speak, Lord, so that I may hear. And give me the courage to go where Your voice leads. In Jesus’ name I pray. Amen.