In Bethlehem a Newborn Boy ~ Hymn 153 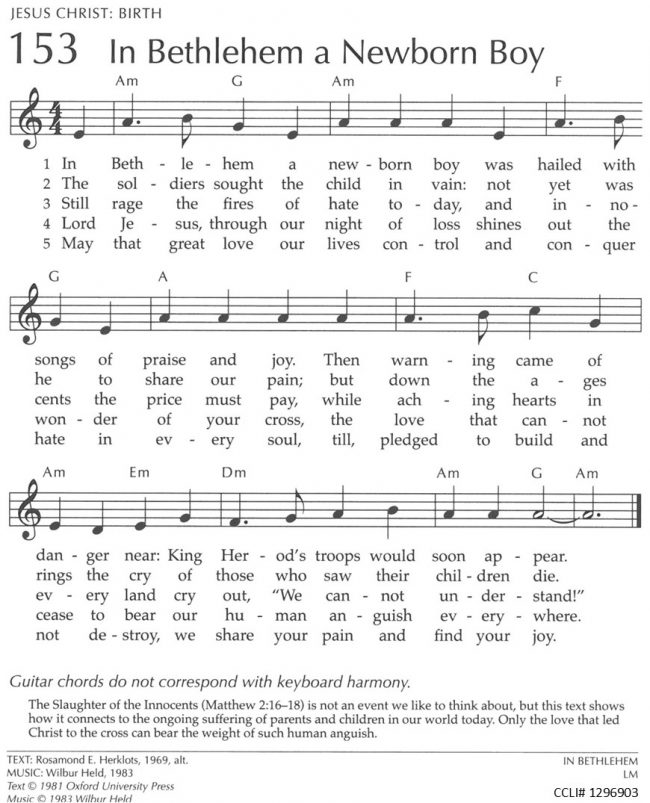 Then Herod secretly called for the wise men and learned from them the exact time when the star had appeared. Then he sent them to Bethlehem, saying, “Go and search diligently for the child; and when you have found him, bring me word so that I may also go and pay him homage.” When they had heard the king, they set out; and there, ahead of them, went the star that they had seen at its rising, until it stopped over the place where the child was. When they saw that the star had stopped, they were overwhelmed with joy. On entering the house, they saw the child with Mary his mother; and they knelt down and paid him homage. Then, opening their treasure chests, they offered him gifts of gold, frankincense, and myrrh. And having been warned in a dream not to return to Herod, they left for their own country by another road. Now after they had left, an angel of the Lord appeared to Joseph in a dream and said, “Get up, take the child and his mother, and flee to Egypt, and remain there until I tell you; for Herod is about to search for the child, to destroy him.” Then Joseph got up, took the child and his mother by night, and went to Egypt, and remained there until the death of Herod. This was to fulfill what had been spoken by the Lord through the prophet, “Out of Egypt I have called my son.” When Herod saw that he had been tricked by the wise men, he was infuriated, and he sent and killed all the children in and around Bethlehem who were two years old or under, according to the time that he had learned from the wise men. Then was fulfilled what had been spoken through the prophet Jeremiah: “A voice was heard in Ramah, wailing and loud lamentation, Rachel weeping for her children; she refused to be consoled, because they are no more.” When Herod died, an angel of the Lord suddenly appeared in a dream to Joseph in Egypt and said, “Get up, take the child and his mother, and go to the land of Israel, for those who were seeking the child’s life are dead.” Then Joseph got up, took the child and his mother, and went to the land of Israel. But when he heard that Archelaus was ruling over Judea in place of his father Herod, he was afraid to go there. And after being warned in a dream, he went away to the district of Galilee. There he made his home in a town called Nazareth, so that what had been spoken through the prophets might be fulfilled, “He will be called a Nazorean.”

Matthew 2:7-23, particularly 2:16-18, serves as the scriptural allusion to “In Bethlehem a Newborn Boy”. King Herod had been tricked as the Magi did not return to him and to tell him the location of the child. His anger led him to commit a heinous act – having all children two years of age and younger to be slaughtered by his soldiers. One can envision the blood spilling from homes and into the streets. The bitter wailing of parents for their lifeless children pierces the air along with the shrieks of fear and pain. Listen:

The soldiers sought the child in vain: not yet was he to share our pain; but down the ages rings the cry of those who saw their children die.

The death of children always brings great anguish regardless of the circumstances. Special note was taken when children succumbed to the Coronavirus. We mourn when children perish in accidents. We lament when children are victims of abuse that can lead to their death. Our sorrow is great when children are stricken with diseases requiring surgery, treatments, and therapies, and when all of these are not able to defeat their maladies. We weep as we see children starving to death around the world. Yes, grief over children who die so young and who often do not experience the good things of life before they perish is greater still

Loving Father, we commend to Your compassionate care parents who are bereaved. We pray for children who fight the good fight and who die so Young. Bless and keep all Young ones who know pain and who suffer. Embrace all these children and their families in Your loving arms. Fill them with hope and grant them peace. In the name of Christ, we pray. Amen.