In the Waiting Place 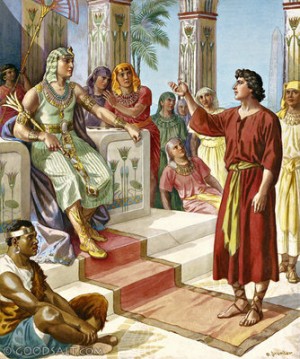 “Two full years later, Pharaoh dreamed that he was standing on the bank of the Nile River. In his dream he saw seven fat, healthy cows come up out of the river and begin grazing in the marsh grass. Then he saw seven more cows come up behind them from the Nile, but these were scrawny and thin, these cows stood beside the fat cows on the riverbank. Then the scrawny, thin cows ate the seven healthy, fat cows! At this point in the dream, Pharaoh woke up.

But he fell asleep again and had a second dream. This time he saw seven heads of grain, plump and beautiful, growing on a single stalk. Then seven more heads of grain appeared, but these were shriveled and withered by the east wind. And these thin heads swallowed up the seven plump, well-formed heads! Then Pharaoh woke up again and realized it was a dream.

The next morning Pharaoh was very disturbed by the dreams. So he called for all the magicians and wise men of Egypt. When Pharaoh told them his dreams, not one of them could tell him what they meant.

Finally, the king’s chief cupbearer spoke up. “Today I have been reminded of my failure,” he told Pharaoh. Some time ago, you were angry with the chief baker and me, and you imprisoned us in the palace of the captain of the guard. One night the chief baker and I each had a dream, and each dream had its own meaning. There was a young Hebrew man with us in the prison that was a slave of the captain of the guard. We told him our dreams, and he told us what each of our dreams meant. And everything happened just as he had predicted. I was restored to my position as a cupbearer, and the chief baker was executed and impaled on a pole.

Pharaoh sent for Joseph at once, and he was quickly brought from the prison.” Genesis 41:1-14

Joseph’s story is one of my favorite stories in the Bible. From beginning to end it is rich in God’s mercy and promises. Joseph had it rough several times and for long periods of time. First, the poor guy is sold by his own brothers then is blessed in Potiphar’s house and moved up the ranks quickly only to be wrongfully accused and thrown into prison. Good gracious it appears Joseph can’t catch a break. In Chapter 40:21 is reads, But the Lord was with Joseph in the prison and showed him his faithful love. And the Lord made Joseph a favorite with the prison warden. Even in prison Joseph felt God’s presence. I know these things gave him hope in a hopeless situation. God kept his promise to Joseph and I know that it what kept Joseph going in a terrible situation. God always comes through and this time was no different. It took a long time, but finally Joseph was released from prison and was able once again to give glory to God through his ability to interpret dreams.

I am reminded time and time again in the Bible to wait on the Lord and be patient.

That is hard to do most days. When God asks me to wait, I get antsy. Joseph’s story is an example of the wonderful things that come when we wait on the Lord even if we have to wait in the valley.

Romans 8:28 “And we know the God causes everything to work together for the good of those who love God and are called according to His purpose for them.” This verse brings me comfort while I am in the waiting place and while I am waiting in the valley. That is my hope, and that was Joseph’s hope. God is with us and He already knows the outcome. I don’t have to worry (even though I do on occasion) because He is with me.

Gracious God, help me today to remember that You have promised never to leave me. You never break Your promises and that brings me great comfort when I am tempted to worry about how things will turn out. I love You, Lord and thank You for the peace You bring me each day. Lord, help me to remember Joseph’s story when I want to throw in the towel because time has passed and I lose track of Your purpose and focus on my own. In Jesus name, Amen.