Introduction to a New Series of Devotionals-6

On Monday we began a new series of devotionals using the Scripture Index of Glory to God Hymns, Psalms and Spiritual Songs as a guide. The Scriptural Index is found on pages 979-988.

This series of devotionals will take us up to Advent and the “Sweeter Than Honey,” the Advent/Christmas /Epiphany Cookbook Devotional. Then, we will resume the series on January 7, 2020, the day after Epiphany.

The plan is to examine many, but not all of the scriptures listed. Where there has been only one scripture verse from a book, like Ezra 3:11 and Esther 4:14, then we will certainly deal with those verses. We will point out the scriptural allusion. For the purpose of this devotional you will be best served to have your Bible handy and the hymn for the day from Glory to God hymnal will be printed, since everyone may not have a copy of the hymnal at home or wherever you are when doing your daily devotional.

READ or SING: Hymn 49 The God of Abram Praise 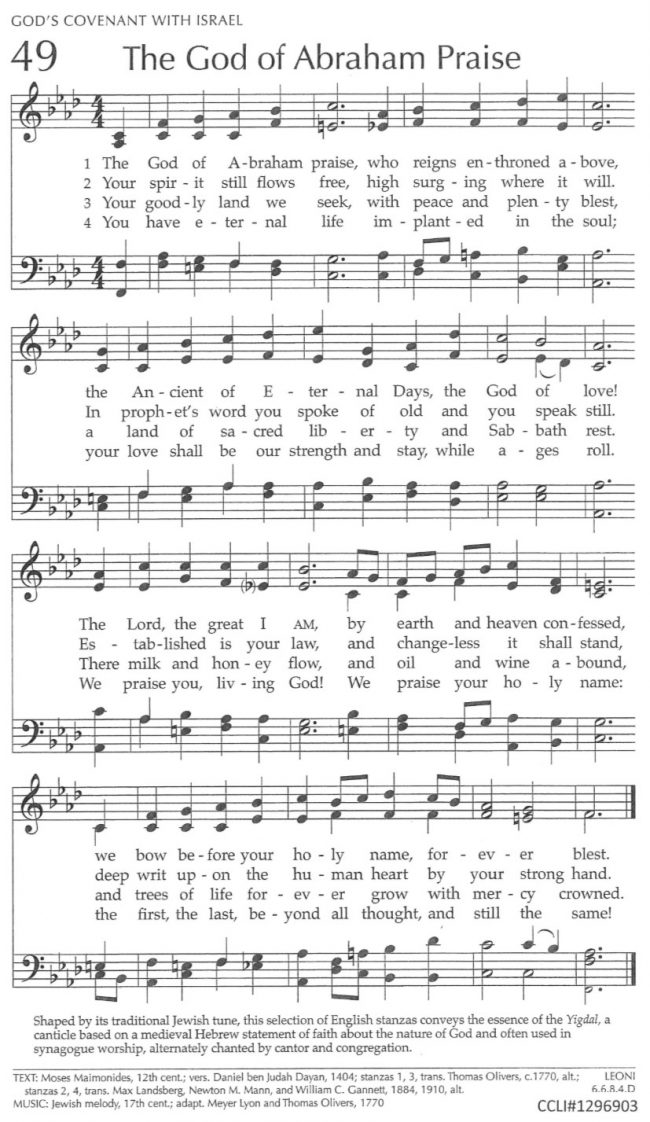 In musical circles, especially those of classical music, the mention of the 3B’s is readily known as Bach, Beethoven, and Brahms. Indeed, they are three classical composers, whose music is widely known and greatly appreciated.

In the Judeo-Christian circles, there are three names belonging to a grandfather, son and grandson that are equally well known, They are known as the Patriarchs – Abraham, Isaac, and Jacob or Israel. In today’s scripture Moses finds himself at the burning bush and he hears a voice that declares, “I am the God of your father, the God of Abraham, the God of Isaac and the god of Jacob.” That was like a password or code to verify God’s identity. Moses knew that he was a Hebrew, even though he had grown up in Pharaoh’s palace. He knew God’s people’s history and so when he heard those words, he knew he was in presence of God.