Jesus’ Love Is A ’Bubblin’ Over 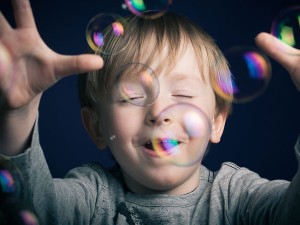 Whether it is right in God’s sight to listen to you rather than to God , you must judge for we cannot keep from speaking about what we have seen and heard. Acts 4:20 (NRSV)

It was one of our earlier Bright Sundays that may have come close to being our last Bright Sunday, at least as far as a few parents were concerned. It was during the Time with Younger Disciples. I had rented a bubble machine to use while teaching the children the song, “Jesus’ Love Is A ’Bubblin’ Over.” It was hidden in the choir loft. As we were learning and singing the song, the bubble machine was turned on and began spewing bubbles. When two young boys (who I hasten to add are now fine young men, with the initials DB and JD) spotted the bubbles, they went wild! There was no containing their excitement and joy! They could not resist chasing them, trying to pop them, and scrambling to find their origin. The parents arose from their seats and quickly headed down front to corral the exuberant boys. Needless to say as the congregation roared with laughter, it was a very Bright Sunday thanks to the antics of the two boys, who have grown into fine young men! (repeated for emphasis – Moms and Dads, you did alright rearing your boys!)

Just as those boys could not restrain their happiness, so Peter and John could not keep silent about what they had seen and heard. The story of the lame man (from Chapter 3) that Peter had healed had circulated amongst the people and had caught the attention of the captain of the temple, the priests and the Sadducees. They were much annoyed by the talk of Jesus’ resurrection from the dead and had Peter and John arrested. The next day, Peter and John were interrogated by Annas and Caiaphas. They recounted the story of Jesus’ crucifixion and death and they declared that there is no salvation other than through Jesus Christ. The religious leaders were aware that the story of the healing of the lame man was well-known. They did not want the story to spread farther, so they ordered Peter and John not to speak or teach at all in the name of Jesus. As for Peter and John, they could not keep from speaking about what they had heard and seen. Good News has to be told. Good News needs to be shared. People then were and people today are longing to hear Good News,

Remembering the excitement of those two boys, let us be reminded that we have the joyous news of Easter … of Christ’s resurrection from the dead to share with others.

“Because Christ lives we, too, shall live!” Thanks be to God!