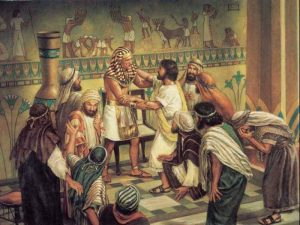 Joseph had been “the baby” brother for awhile before Benjamin came along. Even though technically “a middle child,” Joseph was the favored one by his parents, Jacob and Rachel. As the next to the youngest brother Joseph was largely viewed as the favorite child. Benjamin was next in line as the “most adored” child. Joseph was also something of a brat, telling his older brothers that they would one day bow down to him. He also received at least one special gift, a coat of many colors or a coat with sleeves, from his father. It was no wonder that his brothers grew to resent him.

After years of separation, Joseph and his brothers were reconciled once he had become a Prince of Egypt. At first the brothers were uncertain as to whether Joseph could forgive and forget or let bygones be bygones. They remembered how they mistreated him, lied to their father, and felt guilt for their actions and plotted against him.

“The brothers went to Joseph and said, ‘Here we are – we don’t deserve to be your brothers anymore, so we will be your slaves!’ But Joseph said to them, ‘Don’t be silly! I am your brother no matter what. Even though you planned something bad to happen to me, God turned it into something good!’”

“Your brother no matter what! I love this story of reconciliation of brothers who were estranged. It pains me when I hear of siblings who are estranged. I always hold out hope that they too may be reconciled and enjoy the special relationship of having been gifted with a brother or sister.

Dear God, we thank You for designing us for life in community. Life in a family often presents challenges but also offers great rewards. We do pray for those who are estranged from brothers or sisters that they may be reconciled and love one another. In Christ’s name, we pray. Amen.