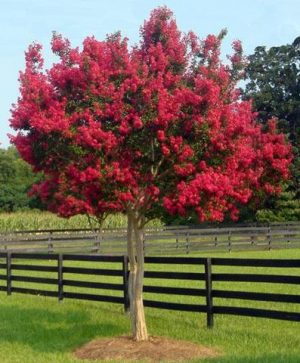 Several years ago, I had some re-landscaping done at my home. During that work I lost a Tonto Red Crape Myrtle. From its roots sprang up a shoot that became entangled with a Little Gem magnolia. Wanting to save both trees, it seemed prudent to relocate the shoot of the crape myrtle. My lawn maintenance man relocated the shoot and instructed me to water it daily for weeks which I did to the best of my ability, meaning I may have missed a day or two of watering, but I think I was faithful in my watering job.

Several weeks later the shoot lost all its foliage and its appearance gave every indication that it had died. I would not take it up although it had become almost an eyesore. The fall, winter and spring came and in late spring I noticed some budding. Granted two shoots still have shown no signs of life, but that shoot grew leaves and blossomed. I was thrilled to see the Red tonto crape myrtle in bloom again. I told my lawn maintenance man that this was my resurrection tree. As late in the season as it is, it still is blooming! It was not planted by a stream, but it was/is dependent on life-giving water to grow and produce fruit (blossoms).

Psalm 1 begins by comparing the righteous and the wicked. Amongst the people there are those who follow the advice of the wicked, who choose the path of the sinful, and who sit with scoffers. Then there are those who take delight in the law of the Lord and who meditate on His law, day and night. They are the happy ones.

These happy ones may be likened to “trees planted by streams of water, which yield their fruit in due season, and their leaves do not wither. In all that they do, they prosper.”

Then the psalmist describes what awaits the wicked.

O Lord, we want to be numbered among the righteous. To be in that number, we need to meditate on Your law, day and night. May trees growing tall, with green leaves, and laden with fruit serve to remind us how different life is for those who choose to live as God intended. In Your Holy Name, we pray. Amen.