Lurking at the Door 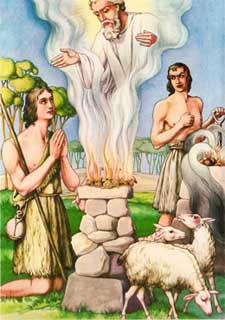 Now the man knew his wife Eve, and she conceived and bore Cain, saying, “I have produced a man with the help of the Lord.” Next she bore his brother Abel. Now Abel was a keeper of sheep, and Cain a tiller of the ground. In the course of time Cain brought to the Lord an offering of the fruit of the ground, and Abel for his part brought of the firstlings of his flock, their fat portions. And the Lord had regard for Abel and his offering, but for Cain and his offering he had no regard. So Cain was very angry, and his countenance fell. The Lord said to Cain, “Why are you angry, and why has your countenance fallen? If you do well, will you not be accepted? And if you do not do well, sin is lurking at the door; its desire is for you, but you must master it.” (Genesis 4:1-7)

The Cain and Abel story may be seen as an early account of sibling rivalry, or it may be the original tale of the conflict between “the farmer and the cowman”. It has a little bit of the old fair/unfair debate. It ends with a bit of God’s grace. On the most basic level, it’s a story of angry feelings and the resulting harsh actions. We can all probably identify with some portion of this story.

The line that has long grabbed by attention is in verse seven where God says to Cain:

“And if you do not do well, sin is lurking at the door; its desire is for you, but you must master it.”

There are lots of things in life that get my juices flowing and my blood boiling. What really matters, though, is my response. I heard someone a while back say “Twenty percent of life is what happens to you, and the other eighty percent is how you deal with it.”

In the passage from Genesis, Cain, who was in a funk, was told that “sin is lurking at the door.” He was further told that “sin’s desire was for Cain.” Life was happening to Cain. His brother had come out on the better end of a deal, and Cain was upset. But he needed to decide what to do with the situation. “You must master [the sin that was lurking nearby]. Sadly, Cain didn’t. Can we?

That’s where we need God’s help each and every day. Sin still lurks at the door. How do we plan to master it?

Wonderful God, help me to identify the sin that desires to control me this day. Help me to spot this dark tendency as it lurks at the door. And give me the strength and power to master it, if only for today. In Jesus’ name I pray. Amen