More Hope for Our Time – Teaching Us How to Live: We Depart to Serve 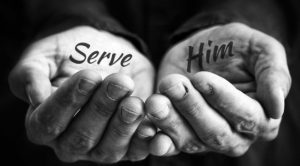 The story is told of a new pastor who preached a first sermon in front of a congregation. To the delight of those assembled, the preacher was faithful to the biblical text, spoke well, and didn’t run on too long.

The next Sunday, the pastor used the same Bible passage, and delivered the same sermon. The Elders were concerned. “Had the preacher made a mistake?” “Was it such a busy week that the pastor had tried to recycle a sermon?” Being that the pastor was new, they kept their concerns to themselves, and graciously waited to see what would happen on the third Sunday.

Much to their amazement, when it came time for the scripture and sermon, the pastor repeated them both yet again. Before the service was over, a group of Elders talked together in the back of the sanctuary. After the service, they asked the pastor if they could all meet. “We liked your sermon three weeks ago.” They began. “Last week, we wondered if you had gotten confused as you repeated the same message. And now this week, you have preached the exact same sermon again. What is going on?” The pastor replied. “I appreciated your nice comments about the sermon three week ago. But that sermon and scripture include God encouraging us to take the Word out and to act. When I didn’t see any action after 6 days, I thought I would preach it again. And still, nothing has happened. I just thought I wouldn’t move on to another scripture until we had all done something with what God was saying in this one.”

So, what do we do with the Word that the Lord speaks to us in the scriptures? Some Bible passages offer encouragement. Some scriptures give us a sense of peace. And some words from the Word are meant to be followed by our action. Near the end of the Sermon on the Mount, Jesus told his followers to take what they had heard and act on them. That would give them the foundation for faithful and hopeful living.

Even though we are not handing out printed bulletins during the COVID-19 times, the headings the copies that the worship leaders use in the 11 AM service still say: We Gather in God’s Name and We Depart to Serve.” We may need to get busy sharing God’s Word and hope with the world.

Open our ears that we may hear what You have to say to us. Then, God, move through our hands and feet, our mouths and lives that we may serve You. In Jesus’ name we pray. Amen.