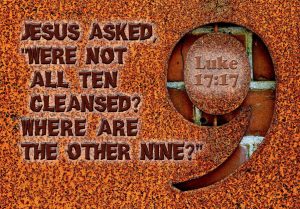 (Oy Vey! – a Jewish expression for dismay or grief)

“Then Jesus asked, ‘Were not ten made clean? But the other nine where are they? Was none of them found to return and give praise to God except this foreigner?”
Luke 17:17-18 (NRSV)

Today I am imagining what might have been said and done in relation to Jesus’ healing of ten lepers. See if you can imagine such a scene as this. Jesus was on His way to Jerusalem passing through the region between Samaria and Galilee. He entered a village and ten lepers approached Him. Keeping their distance, as rightly they should so as not to render Jesus and His company unclean, they cried out, “Jesus, Master, have mercy on us!” When Jesus saw them, He said to them, “Go and show yourselves to the priests.” Obeying Jesus command, they ran toward the priests and as they went they were made clean. Then one of them, when he saw he was healed, turned back praising God with a loud voice. He fell at Jesus’ feet and thanked Him. And he was a Samaritan.” Now we pick up our story with the ten Jewish young men.

After showing themselves to the priests and being pronounced “clean,” they went to be reunited with their own families and most likely went to see their mothers. After the embracing with hugs and kisses, naturally the mothers wanted to know how this wonderfully thing happened. They were eager to learn how their sons’ health had been restored.

The sons recounted their story, telling how they went to see the priests as Jesus commanded. They added that on the way they were healed, but they went to see the priests any way. Once they were healed their first thought was going home to be reunited with their loved ones. Then the mothers asked, “And did you go back to thank Jesus for what He had done for you? “No, Mother, we were so excited to have our health restored and to see our loved ones after all these years. I didn’t go back.”“Oy Vey!” the mothers cried as disbelief and anger filled them. How could you have forgotten to say “Thanks?”“Now, young man you march yourself right back to Jesus and tell Him you had been taught better. You thank Him for His grace and mercy and don’t you come back until you have done so!