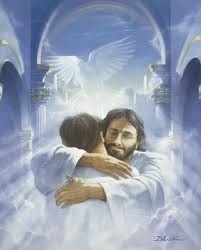 But we do not want you to be uninformed, brothers and sisters, about those who have died, so that you may not grieve as others do who have no hope. For since we believe that Jesus died and rose again, even so, through Jesus, God will bring with him those who have died. For this we declare to you by the word of the Lord, that we who are alive, who are left until the coming of the Lord, will by no means precede those who have died. For the Lord himself, with a cry of command, with the archangel’s call and with the sound of God’s trumpet, will descend from heaven, and the dead in Christ will rise first. Then we who are alive, who are left, will be caught up in the clouds together with them to meet the Lord in the air; and so we will be with the Lord forever. Therefore encourage one another with these words. 1 Thessalonians 4:13-18

I turn to the scriptures in my own life for many reasons (purpose, peace, and God’s plan, to name a few.) And when death occurs in the lives of people around me, I reach for my Bible. John 14:1-7, Revelation 21:1-6, Psalm 23, John 12:20-26, Luke 23:39-42 give me great comfort and hope when I think about life/death/life eternal. There are some other scriptures that also give hope — sometimes. I Thessalonians 4:13-18 is one of those scriptures.

Recently, a family member of someone who had died selected this for a reading at the funeral. In this passage, Paul hopes to encourage some of the people in Thessalonica who were grieving and mourning the death of some of their loved ones. They had hoped that all their loved ones would still be alive when the Lord returned to earth, and they feared that their loved ones who had recently died would miss the great reward of seeing God’s kingdom come. Paul assured them that those who had died in Christ would have a special part in that celebration. While these words were comforting to people in the first century, as we hear them 20 centuries later, it may not be that comforting to think that Christ’s followers who have died since that time have been made to wait around for the kingdom.

In that recent funeral I shared these words to try and give comfort:

“In examining the letters from this pastor to his friends in the faith, it seems Paul’s Christian brothers and sisters, early in his ministry, shared his hope — that the risen Lord Jesus would return very soon to gather all of his followers into the kingdom. Paul had encouraged them to stay single if they were single and married if they were married because they all thought that Christ’s return would be any day. Then, before the day of Christ’s return some of their Christian friends died and the Thessalonians were worried that these dear ones would miss the celebration of Christ’s kingdom. Paul wrote to console them and his words have been preserved for us:

But we do not want you to be uninformed, brothers and sisters, about those who have died, so that you may not grieve as others do who have no hope.

For since we believe that Jesus died and rose again, even so, through Jesus, God will bring with him those who have died.

While the timing may have become an issue, the promise stayed true and Paul wanted them not to grieve like people who have no hope — thinking that death was the end —“Since Jesus died and rose again – even so—through Jesus – God will bring with him those have died.” Paul believed that what Jesus did for us is why we still have hope when earthly life ends.”

a. Jesus’ death and resurrection has given me, a believer, salvation and eternal life

b. When I die, I get to live with Jesus in the kingdom (and so I have great hope and no sorrow for those who have also died)

c. Rather than waiting around here a minute longer than I must, I would like to hear the same words that Jesus spoke to a penitent thief as he was dying “Today you will be with me in Paradise!”

I am one of those people who faces life and death with great hope. Thanks be to God.

God, You made me and then saved me through the death of Jesus on the cross. Claim me now for a wonderful life here on earth for a while, and with You and all who have gone before in heaven forever. Through the grace of our Lord Jesus I pray. Amen.