Notre Dame or The End is Near 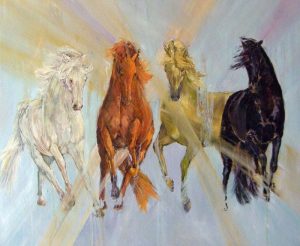 Then I saw the Lamb open one of the seven seals, and I heard one of the four living creatures call out, as with a voice of thunder, “Come!” I looked, and there was a white horse! Its rider had a bow; a crown was given to him, and he came out conquering and to conquer.

When he opened the second seal, I heard the second living creature call out, “Come!” And out came another horse, bright red; its rider was permitted to take peace from the earth, so that people would slaughter one another; and he was given a great sword.

When he opened the third seal, I heard the third living creature call out, “Come!” I looked, and there was a black horse! Its rider held a pair of scales in his hand, and I heard what seemed to be a voice in the midst of the four living creatures saying, “A quart of wheat for a day’s pay, and three quarts of barley for a day’s pay, but do not damage the olive oil and the wine!”

When he opened the fourth seal, I heard the voice of the fourth living creature call out, “Come!” I looked and there was a pale green horse! Its rider’s name was Death, and Hades followed with him; they were given authority over a fourth of the earth, to kill with sword, famine, and pestilence, and by the wild animals of the earth.
Revelation 6:1-8

With apologies to folks who don’t follow sports, I can’t hear about the number 4 and the word horsemen without first thinking of Notre Dame football.

It was 77 years ago that a dramatic nickname coined by a poetic sportswriter and the quick-thinking actions of a clever student publicity aide transformed the Notre Dame backfield of Stuhldreher, Crowley, Miller, and Layden into the most fabled quartet in college football history.

Quarterback Harry Stuhldreher, left halfback Jim Crowley, right halfback Don Miller and fullback Elmer Layden had run rampant through Irish opponents’ defenses since coach Knute Rockne devised the lineup in 1922 during their sophomore season. But the foursome needed some help from Grantland Rice, a sportswriter for the New York Herald-Tribune, to achieve football immortality. After Notre Dame’s 13-7 victory over Army on October 18, 1924, Rice penned the most famous passage in the history of sports journalism.

“In dramatic lore they are known as famine, pestilence, destruction and death. These are only aliases. Their real names are: Stuhldreher, Miller, Crowley and Layden. They formed the crest of the South Bend cyclone before which another fighting Army team was swept over the precipice at the Polo Grounds this afternoon as 55,000 spectators peered down upon the bewildering panorama spread out upon the green plain below.”

George Strickler, then Rockne’s student publicity aide and later sports editor of the Chicago Tribune, made sure the name stuck. After the team arrived back in South Bend, he posed the four players, dressed in their uniforms, on the backs of four horses from a livery stable in town. The wire services picked up the now-famous photo, and the legendary status of the Four Horsemen was insured.

“At the time, I didn’t realize the impact it would have,” Crowley said later. “But the thing just kind of mushroomed. After the splurge in the press, the sports fans of the nation got interested in us along with other sportswriters. Our record helped, too. If we’d lost a couple, I don’t think we would have been remembered.”

After that win over Army, Notre Dame’s third straight victory of the young season, the Irish were rarely threatened the rest of the year. A 27-10 win over Stanford in the 1925 Rose Bowl gave Rockne and Notre Dame the national championship and a perfect 10-0 record.

The passion for sports may have directed the attention of some to the last book of the Bible: Revelation.

As we look at the biblical use of the number 4, the four horsemen are a part of the highly symbolic language in this apocalyptic section of scripture. In a world where evil challenges good, the four horsemen show what the end times may resemble. Reading Revelation is a challenge to many Christians. I like to hold on to how I heard the book described many years ago – “In the end, we win.”

Dear God, let me look to Your word regularly so that I can hear again and again of the power You have to save and transform us and the world around us. In Jesus’ name I trust and pray. Amen.