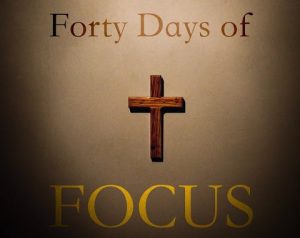 4 Then Jesus was led up by the Spirit into the wilderness to be tempted by the devil. 2 He fasted forty days and forty nights, and afterwards he was famished. 3 The tempter came and said to him, “If you are the Son of God, command these stones to become loaves of bread.” 4 But he answered, “It is written,

‘One does not live by bread alone,
but by every word that comes from the mouth of God.’”

5 Then the devil took him to the holy city and placed him on the pinnacle of the temple, 6 saying to him, “If you are the Son of God, throw yourself down; for it is written,

‘He will command his angels concerning you,’
and ‘On their hands they will bear you up,
so that you will not dash your foot against a stone.’”

7 Jesus said to him, “Again it is written, ‘Do not put the Lord your God to the test.’”

8 Again, the devil took him to a very high mountain and showed him all the kingdoms of the world and their splendor; 9 and he said to him, “All these I will give you, if you will fall down and worship me.” 10 Jesus said to him, “Away with you, Satan! for it is written,

‘Worship the Lord your God,
and serve only him.’”

11 Then the devil left him, and suddenly angels came and waited on him.

As we are about to start the season of Lent, I have spent a little time reflecting on an article in the on-line version of the Encyclopedia Britannica:

Lent, in the Christian church, a period of penitential preparation for Easter. In Western churches, it begins on Ash Wednesday, six and a half weeks before Easter, and provides for a 40-day fast (Sundays are excluded), in imitation of Jesus Christ’s fasting in the wilderness before he began his public ministry.

A period of preparation and fasting likely has been observed before the Easter festival since apostolic times, though the practice was not formalized until the First Council of Nicaea in 325 CE. It was a time of preparation of candidates for baptism and a time of penance for grievous sinners who were excluded from Communion and were preparing for their restoration. As a sign of their penitence, they wore sackcloth and were sprinkled with ashes. This form of public penance began to die out in the 9th century, and it became customary for all the faithful to be reminded of the need for penitence by receiving an imposition of ashes on their foreheads on the first day of Lent—hence the name Ash Wednesday.

In the early centuries, fasting rules were strict, as they still are in Eastern churches. One meal a day was allowed in the evening, and meat, fish, eggs, and butter were forbidden. The Eastern church also restricts the use of wine, oil, and dairy products. In the West these fasting rules have gradually been relaxed. The strict law of fasting among Roman Catholics was dispensed with during World War II, and only Ash Wednesday and Good Friday are now kept as Lenten fast days. However, the emphasis on penitential practice and almsgiving remains, and many Catholics also observe a meatless fast on Fridays during Lent. In addition, Catholics and other Christians often choose to give up specific pleasures, such as sweets, alcohol, or social media, during Lent as a way to foster simplicity and self-control; many use their cravings or desires for these items as a reminder to pray and to refocus on spiritual matters.

In the Anglican churches, The Book of Common Prayer prescribes that Lent be observed with fasting. In Lutheran and many other Protestant churches, Lent is observed with various services and practices, though Lent is not formally observed in many Evangelical or nondenominational churches.

We now have 40 days in which to focus on God as we prepare to celebrate Easter 2021.

Help me to walk and talk the faith as I join on the journey of discipleship with Jesus these next 40 days. Amen.