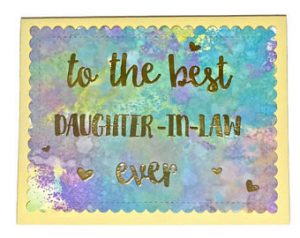 Orpah kissed her mother-in-law, but Ruth clung to her. Ruth 1:14b

Though I have never been married and thus have never had any in-laws, I am well acquainted with the fact that persons and their in-laws often do not get along. Though not accurate data, I would suspect that for every good in-law relationship, there are ten that are poor to almost unbearable. With the story of Ruth we have that one in-law relationship that is not just good, but is almost unbelievably beautiful!

A famine comes upon the land of Judah and a man named Elimelech moves with his wife, Naomi, and his two sons, Chilion and Mahlon to the land of Moab. For awhile all is well in their adopted homeland until Elimelech dies. Naomi is bereft of her husband. Her two sons grow and then take wives from the Moabite people. Chilion marries Orpah and Mahlon marries Ruth. Ten years later tragedy strikes Naomi and this time she mourns her two sons. She is left with her two foreign daughters-in-law, who have proven to be exceptionally good to her. Naomi decides it is time to return to Judah and she wishes to send her two daughters-in-law to their homes so that they may be reunited with their families of origin, marry again and maybe have children and grandchildren, which are no longer possible for Naomi.

She entreats Orpah and Ruth three times to return to their homes, to marry and rebuild their lives. Twice they decline and affirm their desire to remain with Naomi. Orpah relents and returns to Moab, while Ruth presses on with Naomi to Bethlehem in Judah. Ruth promises, “Where you go, I will go, where you go, I will go, your people shall be my people and your God my God. Where you die I will die—there will I be buried.” (1:16-17a) In life and in death, Ruth pledges to remain with Naomi. For Ruth to have felt so strongly about Naomi, she must have been a loving and exemplary mother-in-law. For Naomi to have felt so strongly about Ruth and Orpah, they must have been exceptional daughters-in-law. Whether a matter of the heart or will; Naomi, Orpah, and Ruth became family members, even though they were not blood relatives.

Loving Father, You set us to live in families and life within that community is often difficult. Becoming family is often trying for those who are in-laws. Whether a matter of heart or will, help us to love and accept one another and so become families who want only what is best for each other. In Christ’s name, we pray. Amen.