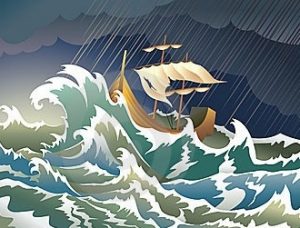 The 27th chapter of the Acts of the Apostles features two main characters and a storm that seems like it will never end. The characters are introduced as such:

When it was decided that we were to sail for Italy, they transferred Paul and some other prisoners to a centurion of the Augustan Cohort name Julius.
Acts 27:1

The drama in the second half of Acts chronicles Paul’s missionary journeys and how he helped spread the good news. God had planned for Paul to ultimately be able to preach the gospel in Rome. An eventful voyage is another step on that journey. Chapter 27 weaves a detailed narrative of dangerous port to port winter travel. Against Paul’s advice, the centurion, the pilot, and the owner of the ship mistakenly sail into the heart of a storm. For 14 days and nights it seems that the hundreds of folks on the ship would perish. But God spoke to Paul in the night, assuring him that while the ship would be lost, if all the passengers and crew remained together they would be saved. The centurion and the others trusted Paul’s guidance, and they stuck together. Paul’s God was planning to save the people. And the centurion saved Paul.

We have already seen, back in the story of the Philippian jailer (Acts chapter 16) that the Romans made sure that soldiers and guards would do anything to keep their prisoners in custody. The Roman rule of discipline stated that if a prisoner escaped, the responsible custodian would be executed by his superiors. Knowing this, Julius, a centurion of the Augustan Cohort made a gutsy and godly call as the ship was crashing on rocks:

The soldiers’ plan was to kill the prisoners, so that none of them might swim away and escape, but the centurion, wishing to save Paul, kept them from carrying out their plan. He ordered those who could swim to jump overboard first and make for the land and the rest to follow, some on planks and others on pieces of the ship. And so it was that all were brought safely to land.
Acts 27:42-44

Julius risked his life to preserve Paul and his message.

Do we ever consider risking some punishment or consequence so that the good news will be preserved and proclaimed? Do we think the good news is worth the risk?

God, use me where I am, and in what You have called me to do each day, to help spread the good news of what You have done for me in Jesus Christ, my Lord and Savior, in whose name I pray. Amen.