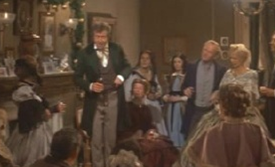 “But when the fullness of time had come, God sent his Son, born of a woman, born under the law, in order to redeem those who were under the law, so that we might receive adoption as children. And because you are children, God has sent the Spirit of his Son into our hearts, crying, “Abba! Father!” So you are no longer a slave but a child, and if a child then also an heir, through God.” Galatians 4:4-7 (NRSV)

By far my favorite movie version of Charles Dickens’ A Christmas Carol is the 1951 British film with Alastair Sim appearing as Ebenezer Scrooge. My second favorite movie version is the musical Scrooge with Albert Finney in the starring role with music by Leslie Bricusse. While there are some departures from Dickens’ story line, the film is largely faithful to the text and Bricusse has written some rousing as well as reflective songs for the score. Three of the rousing songs that I especially like are: December the Twenty-Fifth, I Like Life and Thank You Very Much.

December the Twenty-Fifth is set within the visitation by the Ghost of Christmas Past. The Spirit shows Ebenezer a shadow of a past Christmas that was joyful … that being when he worked as a clerk for Old Fezziwig. Ebenezer sees himself enjoying a Christmas Party thrown by his former boss before he became so consumed with making money. Some of the lyrics are:

Without a doubt December 25th is my favorite day of the year! Though more theologians declare that Easter is the holiest day of the Christian year, I would maintain that Christmas Day is because that is truly when God so loved the world that He gave His only Son. We would have no Easter, without first having Christmas. There is a part of me that wishes “every day could be December the twenty-fifth,” but in time that special day might seem less so. I always hope that the Christmas spirit of joy dwells within me every day, as I remember God’s great gift of love to the world!

O God, we thank You that when the fullness of time had come, You sent Your son Jesus to be born of a woman in order to redeem us. Help us always to be grateful for this Your most precious of gifts and grant that we may be filled with joy all of our days knowing that through Him we have become Your children and heirs of the kingdom. In Jesus’ name, we pray. Amen.