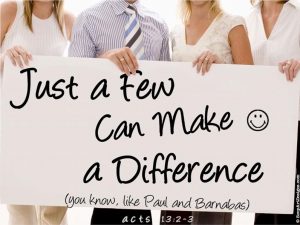 In Acts chapter 14, Paul and Barnabas traveled throughout several cities ‘speaking boldly’ for the Lord. They traveled from Iconium to the cities of Lystra and then Derbe. So Paul and Barnabas spent considerable time there, speaking boldly for the Lord, who confirmed the message of his grace by enabling them to perform signs and wonders. Acts 14:3

News of the actions and the word of the Lord spread.

The priest of Zeus, whose temple was just outside the city, brought bulls and wreaths to the city gates because he and the crowd wanted to offer sacrifices to them. But when the apostles Barnabas and Paul heard of this, they tore their clothes and rushed out into the crowd, shouting: “Friends, why are you doing this? We too are only human, like you. We are bringing you good news, telling you to turn from these worthless things to the living God who made the heavens and the earth and the sea and everything in them. In the past he let all nations go their own way. Yet he has not left himself without testimony. He has shown kindness by giving you rain from heaven and crops in their seasons; he provides you with plenty of food and fills your hearts with joy. Even with these words they had difficulty keeping the crowd from sacrificing to them. Acts 14:13-18

Paul and Barnabas put their life on the line every time they went out to speak for the Lord. At times they were met with stones, at times they were treated as Gods. What is amazing is that through this uncertainty they were able to ‘open the door’ to faith for Jews and Gentiles alike. Two ordinary men. This verse reminds me that what I do daily is seen as an example of my faith. This tells me that as we travelled as a small group in Honduras with our Honduran brothers and sisters, we were touching lives through Christ. It also reminds me to be humble in service to the Lord. On arriving there, they gathered the church together and reported all that God had done through them and how he had opened a door of faith to the Gentiles. Acts 14:27

Dear Lord, my daily prayer is to live my life so others see it as an example of my faith. Please give me strength to live this life of faith especially when it would be easier to take those short-cuts that question my faith. Help me to remain humble in Your name. Amen.