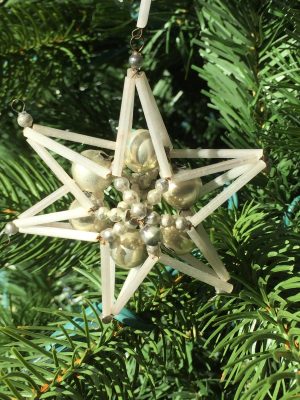 How could it be anything but a star? I did and do love my husband Len, but how could I not have known this was going to be a serious conflict? It never came up in our discussions prior to marriage. Star or Angel? Seriously? Growing up with the familiar does not necessarily invite change. Surely we knew about Presbyterians and Catholics, Republicans and Democrats, people who loved mushrooms and those who left them for us. But mother never prepared me for this!

Our first Christmas together was in New Mexico and we couldn’t afford a real tree because Len was in the Air Force stationed at Holloman AFB in Alamogordo. We only had a tabletop (we called it a bottle brush) tree, so the topper wasn’t an issue yet. It didn’t become a point of contention until the second year of our marriage. That Christmas we were stationed at Sheppard AFB in Wichita Falls, Texas.

We both knew it was one of those irresolvable problems. He would never see it my way, and I certainly wasn’t going to give in either. So compromise was the order of the day. A bow? I don’t think so. Nothing? That wouldn’t be right either. We must have scoured all kinds of shops and stores, and eventually we found a dove that made us both happy for awhile. Then one year we happened upon an angel whose candle lit up when plugged in to the closest string of lights. Oh, I know what you’re thinking—she caved in. Well, not exactly. Behind this angel were many glittery gold rays, that surely looked like a star!

But now I need to tell you a little about the star topper I grew up with. It came from Czechoslovakia, where my father’s parents were born. It was hand beaded with glass beads on wires. I always thought it was beautiful. Somewhere along the line I found one just like the one I grew up with. Only it isn’t a tree topper, it’s a simple ornament, but virtually identical except for the bottom part. Since I have been the Decorator in Charge of pretty much All Things Christmas, I always place that Czech star up as close to the top of the tree as I can get it. And there always is an angel somewhere up near the top too. There is room on the tree for both, and room in our hearts for love, and room in the Inn. Welcome Savior!

Loving Father, we grow up with traditions in our families of origin. With marriage we learn that traditions vary, and as a new family, compromises or adjustments must be made. We thank You that an angel and a star played important roles in the Nativity stories and indeed there is room on our Christmas trees for both. Thank You for sending us Your Son Jesus to be our Savior and Lord. In His name, we pray. Amen.