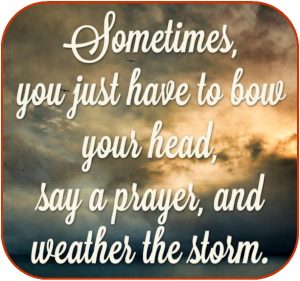 “Men, I can see that our voyage is going to be disastrous and bring great loss to ship and cargo, and to our own lives also.”

After they had gone a long time without food, Paul stood up before them and said: “Men, you should have taken my advice not to sail from Crete; then you would have spared yourselves this damage and loss. But now I urge you to keep up your courage, because not one of you will be lost; only the ship will be destroyed. Last night an angel of the God to whom I belong and whom I serve stood beside me and said, ‘Do not be afraid, Paul. You must stand trial before Caesar; and God has graciously given you the lives of all who sail with you.’ So keep up your courage, men, for I have faith in God that it will happen just as he told me. Nevertheless, we must run aground on some island.”

In an attempt to escape from the ship, the sailors let the lifeboat down into the sea, pretending they were going to lower some anchors from the bow. Then Paul said to the centurion and the soldiers, “Unless these men stay with the ship, you cannot be saved.” So the soldiers cut the ropes that held the lifeboat and let it drift away. Acts 27:10-32

If Paul was around today, I would want to hang around him. I wouldn’t want to go on all of the adventures he went on or be persecuted the way he was, but I would want to be around him because the Lord was always speaking to Him. Oftentimes, I pray for God to speak to me so that I will make the right decision or go in the right direction but sometimes I don’t feel like I can hear Him. (It’s probably because I’m too busy talking and not listening but that’s for another devotional.) But for Paul, the Lord sent an Angel to tell Paul that this is going to be a tough journey but don’t be afraid, it’s going to work out. Of course the men didn’t believe Paul or listen to him at first, but once they realized he was right, they started paying close attention and of course Paul was right because he was listening to the Lord.

Have you ever been in a situation where you know that God was telling you to do one thing but you didn’t listen and the situation didn’t turn out real well at first? But then once you started to listen and follow His plan, everything came together? I think that probably happens to us on a daily basis. We go along with what we think should happen but then our plans don’t work out or the road just doesn’t feel right so we stop, pray, listen, and then follow the God way and boom, everything comes together. I know life isn’t always butterfly and roses, bad stuff happens, sickness occurs, pain comes, but we have to do our part, we have to listen to the Lord and follow His prompting. Things could have been easier for the folks on the ship if they had listened to Paul in the first place but then again, maybe some of their lives were changed because of Paul’s faith. Our God can turn all things for good if we don’t always view the situation through our eyes.

Father God, how wise, wonderful, and awesome You are. Thank You for Your constant guidance, protection, wisdom, and faith that You pour down upon us every day. Help us Lord to be Your children and to listen to You and follow Your directions. It’s hard in our busy/crazy world, but we have to stop and listen to You and respond in the way You want us to go. Open our eyes and hearts Lord Jesus. Amen.