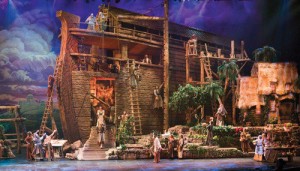 Now the earth was corrupt in God’s sight, and the earth was filled with violence. And God saw that the earth was corrupt; for all flesh had corrupted its ways upon the earth. And God said to Noah, “I have determined to make an end of all flesh, for the earth is filled with violence because of them; now I am going to destroy them along with the earth. Make yourself an ark of cypress wood; make rooms in the ark, and cover it inside and out with pitch. This is how you are to make it: the length of the ark three hundred cubits, its width fifty cubits, and its height thirty cubits. Make a roof for the ark, and finish it to a cubit above; and put the door of the ark in its side; make it with lower, second, and third decks. For my part, I am going to bring a flood of waters on the earth, to destroy from under heaven all flesh in which is the breath of life; everything that is on the earth shall die. But I will establish my covenant with you; and you shall come into the ark, you, your sons, your wife, and your sons’ wives with you. And of every living thing, of all flesh, you shall bring two of every kind into the ark, to keep them alive with you; they shall be male and female. Of the birds according to their kinds, and of the animals according to their kinds, of every creeping thing of the ground according to its kind, two of every kind shall come in to you, to keep them alive. Also take with you every kind of food that is eaten, and store it up; and it shall serve as food for you and for them.” Noah did this; he did all that God commanded him.” Genesis 6:11-8:22

In my youth, I started enjoying comedian Bill Cosby. He had an album (yes, I know all about albums, 8 tracks, cassettes and the like) with a routine about Noah. In the bit, we hear a conversation between Noah and God that begins with God’s instruction to build an ark, and ends with an obedient-turned-annoyed Noah, who changes his tune again to obedient as the clouds burst in the flood.

While I have laughed at this depiction of the story, I have also wondered how obedient I would have been if God called me to do something as incredible as this.

Would I risk the ridicule?
Would I invest the resources?
Would I be willing to change my direction so drastically?

I do have the opportunity, though, to show my obedience to God in small ways each day. I can risk the criticism of some in society as I take a stand for the powerless. I can give some of my resources to God’s work. I can turn away from selfishness and turn to follow Jesus more closely. My ark may look more like a canoe as I do the little things, but every obedient step leads down the path of discipleship.

Lead me a little way each day down the path of following your will. In Christ’s name I pray. Amen.