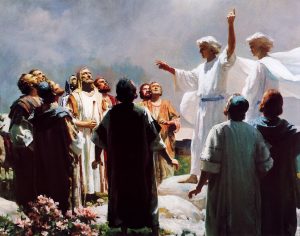 Thursday, May 30, 2019, was Ascension Day. It is the fortieth day of Eastertide and it always falls on a Thursday. It is recognized more in Anglican/Episcopal, Orthodox, and Roman Catholic churches than it is in most Protestant churches.

Perhaps many Floridians or those who have moved here or have been visiting here at a particular time may have likened the Ascension to a space shuttle mission. That was one experience I have had here that I would most likely never have experienced had I not been living here.

I would be outside looking up if I knew the expected time of lift-off or I would be tuned into a television broadcast and then race outside, and look up and to the east, to see the shuttle. Living some distance from Cape Canaveral I would see a small ball of blazing light in the sky. I would watch and see that scene change to what appeared to be a lit cigarette climbing higher and higher. Then I would keep watching for glimmers of the space shuttle until finally, I would see it no longer. I would keep standing there looking up for a few minutes, but it was gone as if it had burned a hole in the sky that was then immediately mended so you could not tell!

After Jesus died and rose again, He and His disciples got together near Jerusalem. Jesus had some instructions for them.

“As you know, God is doing amazing things in the world,” He said. “And your help is needed! We need you to go tell stories about Me. Tell your friends and family and everyone you meet what you’ve learned by following Me! Be My witnesses in the world!”

Then suddenly Jesus was rising – up in the air! What was going on?! He was being lifted up into a cloud!

Two men dressed in white robes were now standing with Jesus’ disciples. They asked them,

“Why are you just standing around looking up toward heaven? Don’t worry, Jesus will come back someday.”

Shuttle watchers must get back to their activities of daily living rather than just staring up into the sky. Disciples of Jesus Christ then and now have work to do. While it is nice to ponder heaven and what it will be like living there, we need to stay busy doing what Jesus would have us to do.

Dear God, we thank You that we can sing and reflect on what it will be like to live in the “Sweet By and By.” We realize that Jesus has given us work to do here and now by telling others about Him and what He has done for us. Help us to be faithful to the task He has given us. In His name, we pray. Amen.