The Brothers Meet Their Brother 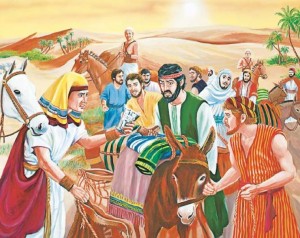 The family of Jacob finally comes together, of course with the hand of God involved, helping to bring justice to all involved. This moving family story found in Genesis takes two chapters, 43 & 44. What happened to Joseph years ago was an example of what envy and jealousy can do even in families. The story written here in Genesis is so involved and interesting that it takes two chapters to cover this moving family experience. Judah talks to his father and urges him to allow Benjamin go with them to Egypt seeking to buy more grain. It seems as if Benjamin’s conscience had lately got to him for what he and the brothers had done to Joseph, that he did not want Jacob his father to go through this pain again.

It is most interesting that Judah, the brother that most wanted to sell Joseph to the Egyptians, is now the brother that seems more interested in resolving the problem of taking Benjamin. Jacob’s sense of religious piety causes Judah to see there are more things in this life than to do harm. His father’s prayer this time reaches his brother’s heart, from a hard heart to one that is a kind heart.

Joseph heaps more and more kindnesses upon them, which the brothers did not fully understand. This story has to touch us today because we are reading what is happening and not living it. We can see that God is fully involved in this story about Joseph and Jacob. When Joseph, with the since of justice, frees his brothers and yet sentences Benjamin, it is with the intent of touching them. He is testing their love and loyalty to their father and their care of the youngest son. If those who had sold Joseph had now abandoned Benjamin, they would have once again experienced the brokenness of their father, Jacob.

We can now see that the purpose of what Joseph is trying to do, and that is to remind his brothers of the terrible thing they did years ago. If Judah, who more or less led the brothers to do wrong to Joseph, is now allowing Benjamin to be held, it would surely allow their aged father to surely die. The beautiful aspect of this wonderful humanistic story of life is that those involved in the wrong they did earlier now have the opportunity to make right! The wrong that was done to Jacob and Joseph would not be repeated now with their youngest, Benjamin.

Creator God, certainly our hearts are warmed reading these ancient stories telling of Your eternal love. In the name of Your Son Jesus Christ, cleanse us also from our sin. Amen.