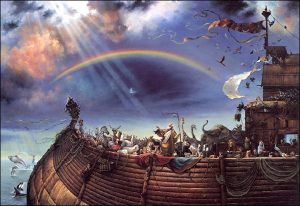 And of every living thing, of all flesh, you [Noah] shall bring two of every kind into the ark, to keep them alive with you, they shall be male and female. Genesis 6:19

On nature programming I will see birds, animals and sea creatures I have never seen and then I think about Noah collecting all of the animals, two of each kind, male and female, and loading them into the ark. (Between you and me, I am still convinced the mosquitoes were stowaways on the ark!) Being the construction engineer of the ark was an enormous task for Noah, but then serving as the animal curator was an even larger one. Then, in verse 22 we read, “Noah did this; he did all that God commanded him.”

The next time you see a creature you perhaps have never seen or one to which you may not previously have given much attention, please take a moment to watch how it moves, to notice its coloration, to observe its features and shape. In other words, take some time to study what God has made and be filled with awe.

Master Designer, we give You thanks for the great variety of animal life that shares this planet with us. We thank You for Noah who was faithful to the tasks to which You called him. In Christ’s name we pray. Amen.