The Furby That Wouldn’t Stop Talking 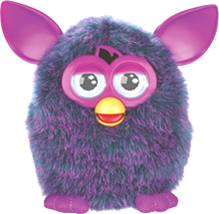 I had married a beautiful single mother six months earlier and this was our first Christmas together. I enjoyed experiencing the joy and excitement of Christmas through my new daughter’s eyes. Watching her expression as she opened her gifts was priceless. One present she was very excited to receive was a Furby. According to Wikipedia, Furby was made by Hasbro and it was a hamster or owl like creature that spoke Furbish but was programmed to learn English words and phrases over time. He seemed very cute and innocent, until we packed him up for a road trip.

It was early in the morning. My new family and I were in route to visit my parents. My wife and daughter were asleep in the car. Somewhere around Lake City I began to hear a voice. From the dark and cold trunk, Furby was calling out in his native language. I chuckled at first, but the longer he talked the more annoyed I became. I tried to ignore him but it was to no avail. I was never so happy to see the Georgia Welcome Center. It was there that I rummaged through the trunk and removed Furby’s batteries.

Dr. Negley preached a sermon called “Does it Make any Sense?”, from the book of Job and shared how Job had been a very rich man and then God permitted it to all be taken away. Job lost his material wealth, his children, and health in the first two chapters. At the end of the sermon, he challenged us to read Job for ourselves that week. We’ve heard the phrase “the patience of Job”, but have you ever thought about the patience of God? In verse 29, Job finally speaks. He is asking “Why me?” or “What did I do to deserve this?” He is whining and who could blame him. Think about everything that he lost in the blink of an eye. To me, the most amazing thing is that God listened and chose to answer. He did not become annoyed and turn Job off like I did Furby.

Heavenly Father, like an annoying “Furby” we know that we try Your patience many times. Forgive us. Help us to be patient with others this Advent season, when people are so stressed and waiting becomes even more difficult. In Jesus’ name, we pray. Amen.