The Parables of Jesus Christ: The Weeds 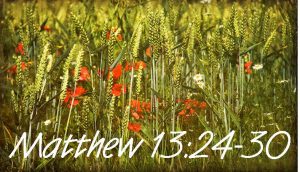 Today’s parable is one of many which were agriculturally based or related. Living in an agricultural society, people could readily relate to Jesus’ teaching. It follows the parable, “The Sower,” which may be more familiar to people. Even though we live in an industrialized and technological society today with greater numbers of people living in cities or suburbs rather than in the countryside, we can relate somewhat to these stories that Jesus taught.

Jesus said, “The kingdom of heaven may be compared to someone who sowed good seed in his field; but while everybody was asleep, an enemy came and sowed weeds among the wheat, and then went away. So when the plants came up and bore grain, then the weeds appeared as well. And the slaves of the householder came to him and said to him, ’Master, did you not sow good seed in your field? Where, then did these weeds come from? He answered, ‘An enemy has done this.’”
Matthew 13:24-30

From our own experience we know very well how weeds can spring up, seemingly overnight. They can get in our grass, our flower beds and our garden areas. We know it is an enemy that spreads the weeds … we just don’t know whether it is the wind that scatters the seeds or birds carrying the seeds as they fly overhead. But Jesus tells this parable to teach us about the kingdom of heaven and not just to remind us how weeds are propagated and what damage they can do.

Jesus said, “The kingdom of heaven may be compared to someone who sowed good seed in his field; ….” We may make the interpretive leap that God is the Sower who sowed good seed which became the Garden of Eden. We know who the enemy was in that story from Genesis. The serpent tempted Eve and Eve tempted Adam and they both disobeyed God. Their disobedience infiltrated the entire human race. Unlike the leopard that cannot change his spots, we humans, by the grace of God, have the opportunity to repent and to amend our ways … to become good grain rather than weeds. Ever since, God has contended with good and evil existing in the world and when evil seems to have gotten the upper hand, people wonder why God has not intervened. God allows good and evil to coexist until the close of human history.

Jesus continued, “The slaves said to him, ‘Then do you want us to go and gather them?’ But he replied, ‘No; for in gathering the weeds you would uproot the wheat along with them. Let both of them grow together until the harvest; and at harvest time I will tell the reapers, Collect the weeds first and bind them in bundles to be burned, but gather the wheat into my barns.’” We know well how the roots of weeds can become entangled with the roots of the good plants. It is true that to uproot them before the harvest is to reduce or destroy the yield of the good grain. God patiently waits hoping that the kingdom of heaven will be stocked with good grain at the time of harvest.

O God, we thank You for the teachings of Jesus. We praise and thank You for Your incredible patience with us. Forgive our sins, help us amend our ways and produce good grain ready to be harvested so that we may be part of the kingdom of heaven. In Christ’s name, we pray. Amen.