This Week’s Devotions Will Be Based on Acts 25 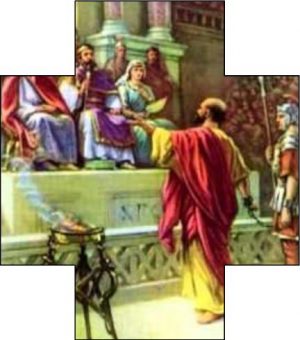 Three days after Festus arrived, he went up from Caesarea to Jerusalem. There the chief priests and the Jewish leaders came to Festus. They brought their charges against Paul. They tried very hard to get Festus to have Paul taken to Jerusalem. They asked for this as a favor. They were planning to hide and attack Paul along the way. They wanted to kill him. Festus answered, “Paul is being held at Caesarea. Soon I’ll be going there myself. Let some of your leaders come with me. If the man has done anything wrong, they can bring charges against him there.”

Festus spent eight or ten days in Jerusalem with them. Then he went down to Caesarea. The next day he called the court together. He ordered Paul to be brought to him. When Paul arrived, the Jews who had come down from Jerusalem stood around him. They brought many strong charges against him. But they couldn’t prove that these charges were true.

Paul answered, “I’m already standing in Caesar’s court. This is where I should go on trial. I haven’t done anything wrong to the Jews. You yourself know that very well. If I am guilty of anything worthy of death, I’m willing to die. But the charges brought against me by these Jews are not true. No one has the right to hand me over to them. I make my appeal to Caesar!”

Festus talked it over with the members of his court. Then he said, “You have made an appeal to Caesar. To Caesar you will go!”

A few days later King Agrippa and Bernice arrived in Caesarea. They came to pay a visit to Festus. They were spending many days there. So Festus talked with the king about Paul’s case. He said, “There’s a man here that Felix left as a prisoner. When I went to Jerusalem, the Jewish chief priests and the elders brought charges against the man. They wanted him to be found guilty.

“I told them that this is not the way Romans do things. We don’t judge people before they have faced those bringing charges against them. They must have a chance to argue against the charges for themselves. When the Jewish leaders came back with me, I didn’t waste any time. I called the court together the next day. I ordered the man to be brought in. Those bringing charges against him got up to speak. But they didn’t charge him with any of the crimes I had expected. Instead, they argued with him about their own beliefs. They didn’t agree about a man named Jesus. They said Jesus was dead, but Paul claimed Jesus was alive. I had no idea how to look into such matters. So I asked Paul if he would be willing to go to Jerusalem. There he could be tried on these charges. But Paul made an appeal to have the Emperor decide his case. So I ordered him to be held until I could send him to Caesar.”

Then Agrippa said to Festus, “I would like to hear this man myself.”

Festus replied, “Tomorrow you will hear him.”

The next day Agrippa and Bernice arrived. They were treated like very important people. They entered the courtroom. The most important military officers and the leading men of the city came with them. When Festus gave the command, Paul was brought in. Festus said, “King Agrippa, and everyone else here, take a good look at this man! A large number of Jews have come to me about him. They came to me in Jerusalem and also here in Caesarea. They keep shouting that he shouldn’t live any longer. I have found that he hasn’t done anything worthy of death. But he made his appeal to the Emperor. So I decided to send him to Rome. I don’t have anything certain to write about him to His Majesty. So I have brought him here today. Now all of you will be able to hear him. King Agrippa, it will also be very good for you to hear him. As a result of this hearing, I will have something to write. It doesn’t make sense to send a prisoner on to Rome without listing the charges against him.”