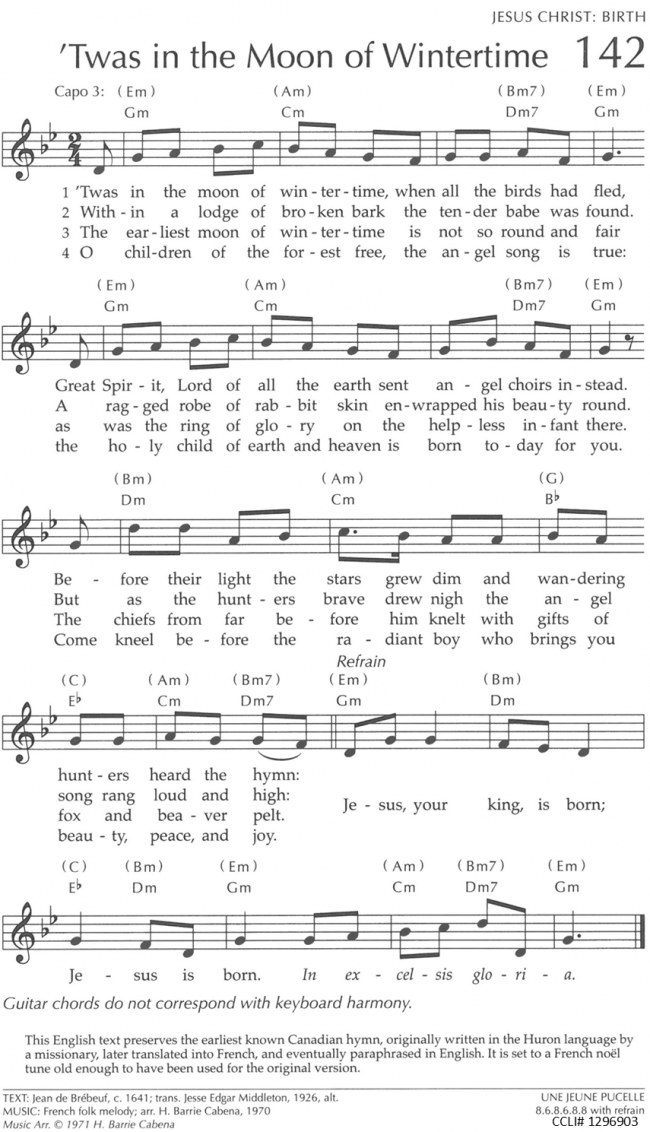 When they had heard the king, they set out; and there, ahead of them, went the star that they had seen at its rising until it stopped over the place where the child was. When they saw that the star had stopped, they were overwhelmed with joy. On entering the house, they saw the child with Mary his mother; and they knelt down and paid him homage. Then, opening their treasure chests, they offered him gifts of gold, frankincense, and myrrh.

We know that according to the evangelist Matthew, the baby Jesus received the gifts of gold, frankincense, and myrrh. Wise Men presented these gifts to Jesus and his mother Mary, who were found in a house in Bethlehem.

Later, this event was illustrated in a different setting so that this story could be better understood by the people. Instead of a house, the setting was a lodge of broken bark. Instead of bands of cloth wrapping the child, he is swaddled with rabbit skin. Instead of Magi (astrologers), these “givers” are hunters – chiefs. Instead of gold, frankincense and myrrh, they lay before him gifts of fox and beaver pelt.

As the story is told, it has been adapted for its hearers from Bethlehem of the first century to Canada of the 16th century. When I was a baby, many years ago, I received a baby blanket, a shirt and shorts set, and a baby bottle hugger. Fast forward 26 years and a friend received a Christening outfit, an engraved bracelet, and a baby doll. Fast forward 40 years, and my friend, as a mother-to-be received a Milestone blanket, a “name” wall plaque and a “My First Bible”. Yes, over the years baby and baby shower gifts have changed from cloth diapers to Pampers, from Teddy bears to any plush toy imaginable. **

The scriptural allusion to “’Twas in the Moon of Wintertime” is the story of the Visitation of the Magi, Verses 9 and 10 of Matthew Chapter 2 are recognizable in verses 2 and 3 of the hymn. The Glory to God commentator has noted: The English text preserves the earliest known Canadian hymn, originally written in the Huron language by a missionary, later translated into French, and eventually paraphrased in English. It is set to a French noel tune old enough to have been used for the original version.

** Special thanks to MSS and ALM

Dear God, the angels proclaimed to the shepherds that they had good news for all the people. We thank You for missionaries who make that story come alive for the native peoples so that they can know Jesus as their Lord and Savior too. In his name we pray. Amen.