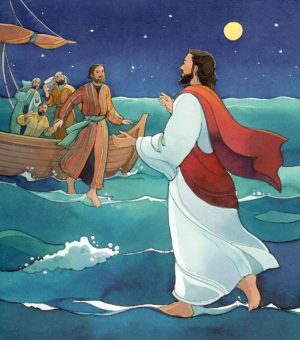 From my childhood on I have loved this story. I always fancied myself as being a disciple of Jesus who would not falter as Peter did. Whenever I tried to reenact this story, I would put one foot in the creek and follow it with another. Even the creek could not buoy me up. I never played this game with anyone else. It was just me and the Lord above. I learned quickly that I was made like Peter and in fact Peter still bested me for at least he walked several steps before he began to sink. I did it with the first and second footsteps!

“If it’s really you, Jesus, tell me to walk on the water,” Peter said bravely. “Okay!” Jesus shrugged. “Come on out, Peter! The water is fine! “

Gulp! Peter swallowed hard. He placed one foot onto the water. Plop! It didn’t go under. He tried the other foot. Plop! He was standing! He kept his eyes glued on Jesus as he took a few careful steps. He walked faster and faster. Splish! Splash! Only his feet were getting wet. Jesus smiled at him.

The wind kicked up. The storms clouds grew darker. Peter took his eyes off Jesus and the water crept up to his ankles … then to his knees … then to his chest. With one arm raised and outstretched Peter called out asking Jesus to save him. Jesus reached out his hand and pulled Peter out of the sea. Jesus’ disciples were amazed. Peter and Jesus climbed into the boat and the disciples hailed Jesus as the son of God.

Lord Jesus, keep our eyes always fixed on You, especially when we find ourselves in the storms of life. You will save us! You will support us. Thank You, Lord. Amen.