What must I do? 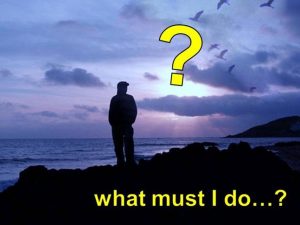 When you look at the map in the NIV study Bible, it is amazing the number of miles that Paul and Silas covered in their discipleship. They were definitely not easy miles when you take into account not only the difficulty of traveling by foot, small boat and possibly horse or donkey, but also the anger, jealousy and hatred by those who were challenged in their beliefs by Paul and Silas’ teachings.

About midnight Paul and Silas were praying and singing hymns to God, and the other prisoners were listening to them. Suddenly there was such a violent earthquake that the foundations of the prison were shaken. At once all the prison doors flew open, and everyone’s chains came loose. The jailer woke up, and when he saw the prison doors open, he drew his sword and was about to kill himself because he thought the prisoners had escaped. But Paul shouted, “Don’t harm yourself! We are all here!”

They replied, “Believe in the Lord Jesus, and you will be saved – you and your household. Then they spoke the word of the Lord to him and to all the others in his house. Acts 16:25-32

I don’t like to admit the number of times I have made a mistake, a wrong choice, and even thought some thoughts that were definitely not Christian! The jailer woke up and thought he had made a doosey of a mistake, not only letting all the prisoners escape but probably scared silly not understanding how it all happened with the earthquake and chains flying! Paul and Silas’ words of comfort worked for the jailer and they work for me and you. “Believe in the Lord Jesus, and you will be saved.” I learned some things about Grace and Gratitude this week at the Montreat Worship and Music Conference that kind of mirror this scripture. I hope to build upon what I learned in the coming weeks and months.

Dear Lord, thank you for Your unconditional grace. Build in us the strength to let our gratitude shine in our daily lives. Amen.