When God Gets Involved 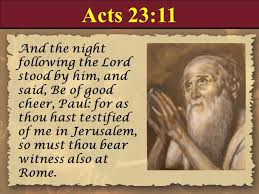 I know that God is always involved in our lives. But there are some times when it is pretty obvious that God is in charge. Case in point: God wanted the gospel to be preached in Rome, by Paul. And it was going to happen.

When the dissension became violent, the tribune, fearing that they would tear Paul to pieces, ordered the soldiers to go down, take him by force, and bring him into the barracks.

That night the Lord stood near him and said, “Keep up your courage! For just as you have testified for me in Jerusalem, so you must bear witness also in Rome.”

In the morning the Jews joined in a conspiracy and bound themselves by an oath neither to eat nor drink until they had killed Paul. There were more than forty who joined in this conspiracy. They went to the chief priests and elders and said, “We have strictly bound ourselves by an oath to taste no food until we have killed Paul. Now then, you and the council must notify the tribune to bring him down to you, on the pretext that you want to make a more thorough examination of his case. And we are ready to do away with him before he arrives.”

Now the son of Paul’s sister heard about the ambush; so he went and gained entrance to the barracks and told Paul. Paul called one of the centurions and said, “Take this young man to the tribune, for he has something to report to him.” So he took him, brought him to the tribune, and said, “The prisoner Paul called me and asked me to bring this young man to you; he has something to tell you.” The tribune took him by the hand, drew him aside privately, and asked, “What is it that you have to report to me?” He answered, “The Jews have agreed to ask you to bring Paul down to the council tomorrow, as though they were going to inquire more thoroughly into his case. But do not be persuaded by them, for more than forty of their men are lying in ambush for him. They have bound themselves by an oath neither to eat nor drink until they kill him. They are ready now and are waiting for your consent.” So the tribune dismissed the young man, ordering him, “Tell no one that you have informed me of this.”

Then he summoned two of the centurions and said, “Get ready to leave by nine o’clock tonight for Caesarea with two hundred soldiers, seventy horsemen, and two hundred spearmen. Also provide mounts for Paul to ride, and take him safely to Felix the governor.” Acts 23:10-23

The Lord told Paul that he would be going to Rome.

This is another nighttime conversation between God and one of God’s people. Paul heard that the Lord wanted him to speak about God to people in Rome, and nothing (and no one) was going to stop him.

Some of the Jewish leaders planned to kill Paul. God used “the son of Paul’s sister” to thwart the plot.

Since it was dangerous for Paul to travel alone with assassins around, God commissioned two Roman centurions and the 200 government troops they commanded to watch over Paul as he travelled. And God also provided the mounts.

This part of the story of Paul blatantly asserts that God gets involved.

Maybe we need to keep an eye out when, through relatives, those sworn to protect, or even something with four legs and fur, God has intervened.

Thank you God, for caring enough to listen, and to act in our lives, through our Lord and Savior, Jesus, in whose name we pray. Amen.